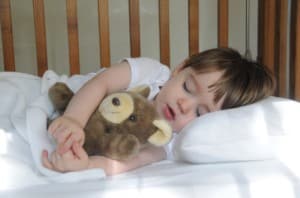 Nighttime sleep is one of the most important activities of growing babies and toddlers and according to a new study, if they do not get enough of this sleep they could be at risk to become over weight.

According to Dr. Janice Bell who studied the national survey taken between 1997 and 2002, “This is something we may be able to change to address the growing obesity problem.”

She also found that whereas there was a link between sleep deprivation and obesity in children under the age of 5 the same link was not seen in kids in the age group of 5 to 13 although the link was present in adults who have for long time known to have relation between lost sleep and weight issues.

The study did not give clear reasoning as to why less sleep led to obesity but some experts believe it is due to the more wakeful hours a baby spends and therefore eats more. Plus children who are tired are less likely to engage in vigorous activities or exercise.

According to paediatrician Dr. Jennifer Shu,

“This study gives parents one more reason to prioritize healthy sleeping habits in their young children’s lives.” She also adds, “Regardless of the reasons involved, however, repeated studies suggest that children benefit from more sleep, not less, so parents should remember to consider sufficient sleep as part of their child’s overall health and well-being.”

CDC sleep recommendations suggest on an average a one year old should sleep 13 to 15 hours at night, and a 3 to 5 year old must sleep between 11 to 13 hours.

“we know in adults that shortened sleep duration is associated with changes in substances [or hormones] like ghrelin and leptin, which can increase hunger, decrease metabolism, and lead to insulin resistance.”

Although she’s not a pediatrician or sleep expert, Dr. Jampolis recommends some of the same suggestions for helping toddlers get to sleep as she gives to adults: