Home » Larry Birkhead To Be A Reality Star 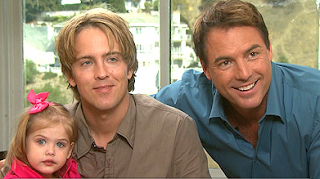 Larry Birkhead’s life is about to get a lot more public! The already busy celebrity daddy has announced that his new reality show scheduled is scheduled to air on the E! network next year.

The big question is – Will Dannielynn be part of the show?

Larry tells ET that when he was wavering on whether or not to do the show, Tori Spelling, herself a reality show star now, encouraged him to do it, saying, “Dean and I will support you. Why not? Your life is out there anyway.”

“My life in the last couple of years has been a reality show,” Larry explains to Mark Steines. “There’s been so many things out there that are not true, and there are so many things that I’ve taken a lot of beatings for and I haven’t set the record straight; nobody knows the true reality of how I live and what I go through.”

The series will follow Larry’s day-to-day exploits as a single father running a business of Anna’s and home-schooling his 18-year-old nephew, Justin, whose father passed away and lives with them.

As for little Dannielynn, he beams, “The thing I’m most proud of is she doesn’t know anything that’s going on; she’s just happy and worries about her toys and we just have the best time. … This time is really about bouncing back and being happy and taking advantage of the things we have, and not forgetting what we don’t have — but also just going forward.”