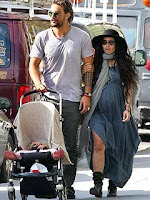 Lisa Bonet announced to People Magazine that she is expecting her third child.

“I’m seven months and I feel great,” says Bonet, “I’ve had a tremendous amount of energy, which is lucky, because I have a 14-month-old.”

The Life On Mars star and her boyfriend of two years, actor Jason Momoa, have 14-month-old daughter Lola. The actress also has 19-year-old daughter Zoe Kravitz with rocker Lenny Kravitz.

She also tells the magazine that she has no plans to find out whether a son will be joining the two daughters.

“When my friends ask me, I say, ‘I really don’t know,'” she says. “I love the mystery and I trust the mystery about it. It adds a whole other component at the end.”