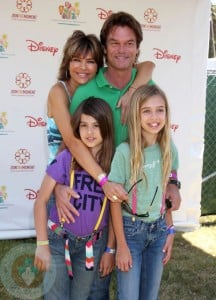 Lisa Rinna and husband Harry Hamlin are reportedly trying to have another child. The couple have been married for thirteen years, and already have two children at home – 12-year-old Delilah Belle and Amelia Gray, 9. Now they want to try again.

A source close to the couple told Pop Eater:

“The timing is just perfect now and the girls are at a great age. Plus, with the success of their reality show ‘Harry Loves Lisa,’ a second season with such a built-in storyline would be as compelling as it gets. How much fun would it be to watch these two as they prepare for another child?”

When asked, the reality star didn’t confirm or deny the news she only said that trying is the fun part and winked.