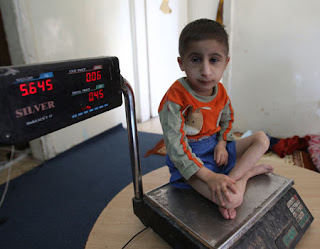 Some say that 11-years-old Hazem Hawamdeh of Jerash, Jordan could be the smallest boy in the world. In the picture, he sits on a scale to show he weighs just 12 pounds and stands just 2 feet, 4 inches tall.

His family and doctors struggle to solve the mystery of his small size.

If I were to guess, I would say that he probably has Primordial Dwarfism, a genetic condition that effects children who are profoundly growth delayed for their gestational age before birth and at birth.

This is the same condition that effects Kenadie Jourdin-Bromley, a little girl I have had the pleasure of meeting because her mom and I used to work together.

Primordial Dwarfism is believed to affect only about 100 people in the world.