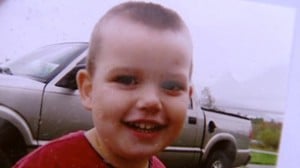 Two-year-old Brendan Michael Wood was reported missing Tuesday afternoon in Nova Scotia. The layer of snow and winter cold meant that searchers knew they had to act fast to find the boy.

It was a joyous moment for family and friends when the missing toddler was finally found, five hours after his disappearance. Night fall had made searching more difficult, but it also made the time even more critical. The cold winter night could have become fatal for such a young child. Despite wearing snow pants, a coat and mittens, it would be easy for the cold and wet to overtake the small boy.

A neighbor searching the woods is his all-terrain vehicle finally found Brendan, less than a mile from where he was last seen. Despite the hours spent in the cold, Brendan seemed to be healthy and well.

“At the time he was found, he was lying down,” Sgt. Brigdit Leger said in an interview. “He did have one boot off, but it was just beside him … He was crying that he wanted to see his mommy.”

The toddler was taken to the local hospital as a precaution before allowed to go home.

The Wood family was visiting friends when Brendan wandered away. He was last seen playing outside with two other children before he became missing. Searching was made more difficult by the strong winds that were blowing up snow, and the boy’s speech and hearing impairments. Firefighters and search crews from all around the area were sent out to find Brendan in the nearby woods.

Other than being wet and cold, officials are reporting him as fine now.- Summer, staff writer