What if after having your baby the umbilical cord was not cut? What if, instead, you left the cord and placenta attached until it fell off naturally? That is exactly what some women choose to do in a practice called Lotus Birth. 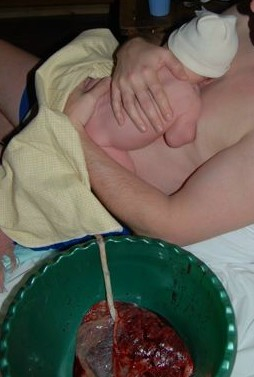 The common practise in birth is to cut the umbilical cord shortly after birth. The remaining cord and placenta are then dealt with separately while a short stump is left. This stump soon dries and falls off, creating the small bump in the center of a navel. In a Lotus birth, however, the placenta stays attached to the newborn until it falls off completely. This can take up to one week to happen.

Lotus birth is a Buddhist expression, meaning “holy, intact child”. The origins of the practise is uncertain, though not all parents who choose Lotus birth are Buddhists themselves. Because of the Internet opening up communication among people from all across the world this rare practise has become more common among those who prefer a more natural birthing experience.

There are several reasons why a parent might choose the Lotus birth option. Some claim that their newborns are calmer and more relaxed in the days after birth. There are spiritual beliefs that the placenta is such an important organ to an infant, a sudden detachment is shocking. Instead a natural, gentler method is preferred by letting nature take its time.

Some advocates for Lotus birth say there are specific medical reasons to avoid clamping and cutting the cord after birth. They may want to avoid the sometimes painful irritated cord stump that occurs. Leaving the cord intact reduces the chances of cord infection. With no cord stump diaper changing during the early days can be easier. Many advocates also say the important cord blood is not lost and can help the newborn child.

According to Dr. Sarah Buckley there are benefits to waiting as long as possible before cutting the cord.

Within the baby’s body, blood becomes, over several minutes, diverted away from the umbilical cord and placenta and, as the lungs fill with air, blood is sucked into the pulmonary (lung) circulation. Mother Nature ensures a reservoir of blood in the cord and placenta that provides the additional blood necessary for these newly-perfused pulmonary and organ systems.

The transfer of this reservoir of blood from the placenta to the baby happens in a step-wise progression, with blood entering the baby with each third-stage contraction, and some blood returning to the placenta between contractions. Crying slows the intake of blood, which is also controlled by constriction of the vessels within the cord7 – both of which imply that the baby may be able to regulate the transfusion according to individual need.

Gravity will affect the transfer of blood, with optimal transfer occurring when the baby remains at or below the level of the uterus until the cessation of cord pulsation signals that the transfer is complete. This process of ‘physiological clamping’ typically takes 3 minutes, but may be longer, or can be complete in only one minute.

This elegant and time-tested system, which ensures that an optimum, but not a standard, amount of blood is transferred, is rendered inoperable by the current practice of early clamping of the cord- usually within 30 seconds of birth.

Some parents carry the placenta in a bowl while waiting for it to detach naturally, while others wrap it in linens or silk. No matter how the parents choose to carry the placenta, it needs to be cleaned and cared for gently after birth. – Summer, Staff Writer