Home » Maggie and Ramona Enjoy a Winter Stroll in Brooklyn

Now that the snow has stopped, Maggie Gyllenhaal and daughter Ramona were spotted enjoying a Winter stroll in Brooklyn today. 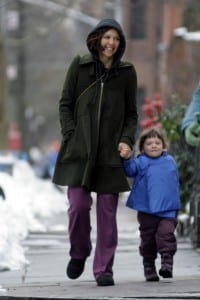 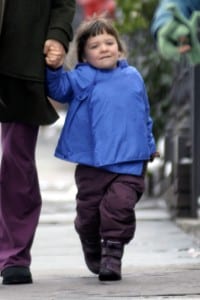 During an interview the indie actress, who was recently nominated for an Oscar for her role in Crazy Heart, spoke about how she balances work and motherhood.

“I had about five movies that came out while I was pregnant and, although I was nauseous at the beginning, I was able to promote them,” she explains. “Then Ramona was born and I couldn’t even pick up the phone to do an interview. I couldn’t take my eyes off her. Having an infant is so hard and complicated. It’s very intense.

“I only worked about 15 days over seven months on The Dark Knight, which was manageable at a time when my focus was on my daughter. But Crazy Heart was offered to me when Ramona was nearly two and I had this feeling that I needed a little something for me. It was like, ‘OK, I want to do some work. I’m a woman and an actor as well as a mother.’”