Good Samaritan Leo Moody was in the right place at the right time on Monday night.  Just moments after Stephen McGouldrick lost control of his vehicle on an icy patch landing the SUV in 2.5 feet of water, the logger stepped in to help save the passengers and a baby, who was trapped in the back seat. 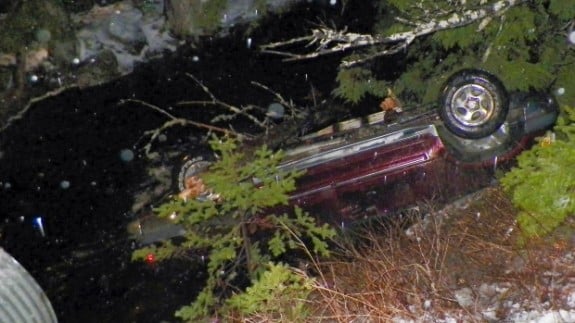 Moody, 44, had been traveling home when he noticed the flipped SUV in a culvert. He immediately dialed 911 and rushed over to see if the passengers needed help. According to Moody, one of the SUV’s passengers told him that her child was in the backseat of the vehicle. Thinking quickly, he swam to the vehicle and cut the straps restraining the car seat to the vehicle. Moody then took the three month-old baby to the shore and handed off the car-seat to Wade Shorey, another passers-by who stopped to help.

McGouldrick and his other passengers had been “hysterical,” following the crash. Moody said that it had been so cold that his hands felt numb while he was cutting the straps of the car seat. He says that he “kept telling myself, don’t drop the knife.” Moody says that he always has his knife handy, typically using it to peel an apple or to whittle a piece of alder, saying “They come in handy, I guess. Monday night really proved it.”

Authorities confirmed that Moody indeed crawled into the SUV to rescue the infant, and handed the child off to Shorey, who performed CPR. Shorey recalls the moment, “He passed the car seat to me and said, ‘Take it,’ I got the baby out of the car seat and started doing CPR.” The child had been in the water for a short time, and had become unresponsive. Shorey, a forester by trade, says that he took a CPR refresher course earlier this year. After he resuscitated the child, she was alert and crying. The girl was then transported to Eastern Maine Medical Center in Bangor, Maine for observation.

Betsy Moody, Leo’s wife, said that her husband had returned home that night cold, soaking wet and shaken up from the incident. She said that’s “Just another reason why I love him – thinking of someone other than himself.”