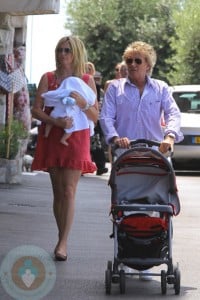 Women get a raw biological deal.  If she hasn’t had kids by her late thirties, a woman may be on a long and emotionally painful road to motherhood.

By contrast, men seem to be able to make babies well into old age.  There’s nothing like asking your grandchildren to babysit their own aunts and uncles.  At least, that’s the impression we get when we hear about certain high profile celebrity dads.

But, research suggests that this sort of indefinite fertility isn’t the norm for most men.

Scientists studied cases of IVF treatments.  In all cases, the eggs were harvested from young, healthy women.  The sperm came from men of varying ages.

What they found is that, on average, men aged 41-45 are as much as seven percent less fertile than those 40 and under.  Beyond age 45 the odds of conception drop from 60 percent to only 35 percent.

“Age counts,” says Paula Fettback, researcher at the Huntington Medicina Reproductiva clinic in Brazil.  “Men have a biological clock too.”

“It is not the same as for women but they can’t wait forever to have children,” Fettback explains.  “They have to think about having children, especially after 45.”

Dr Richard Sherbahn, of the Advanced Fertility Centre in Chicago, does not dispute the likelihood that male fertility diminishes with age, but he suspects that the decline equates to a few percent over decades.  He also points out that IVF treatment can go a long way in compensating for issues with sperm.

Charles Kingsland, gynaecologist at the Liverpool Women’s Hospital corroborates, indicating that the quality of the egg has much more influence on the viability of conception, than the sperm.

“I wouldn’t go rushing off to procreate on the basis that tomorrow my fertility might drop,” Kingsland says. – Jen R, Staff Writer