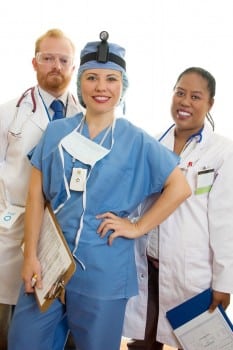 Canada.com has an article about the differences between Male and Female Doctors. They tend to specialize in different areas of medicine.

Female family doctors offer more obstetrics and mental health care services than their male counterparts across the country but fewer surgical services and intensive procedures, according to a report released Wednesday.

The Canadian Institute for Health Information did a study that spanned 10 years showing there’s an evolving difference between what services female and male family physicians provide.

“They will have a different practice and intensity of their workload, so the average number of services will be different than male counterparts as well.”

Nova Scotia, New Brunswick and Quebec all had a higher percentage of female doctors.

Your family doctor probably doesn’t deliver babies. Around 6 months gestation they usually refer you to an obstetrician. In 1994, 26 percent of male and 27 percent of female family physicians – delivered babies. By 2003 only 16% of female and 13% of males were in the delivery room.

More physicians are specializing now rather than having a practice that covers all areas. This is better for the patient because your family doctor may only see certain issues once or twice a month. The specialist usually has seen all variations of a problems, daily, and knows exactly what to do without repeated trips.

Last month I had a root canal done. My family dentist said it would take him 2 hours to do the procedure. The specialist I went to had everything done and I was walking out the door in 45 minutes. She was more expensive but I didn’t have any post surgery complications. When I asked if everything was going to be okay her assistant told me they rarely have issues with her root canals because it’s all she does all day. After all, it’s her Specialty!