Sometimes it’s all about being in the right place at the right time.

Myrtle Beach first responder Marc Hadden took a 911 call that literally changed his life. On a cool November night, Marc and his crew arrived on-scene just in time for Marc to deliver (his first time) a healthy baby girl.

Just hours after that experience Marc and his wife Beth learned that the baby – named Grace – was immediately put up for adoption.

Marc and Beth have two young boys and had hoped for more children. But Beth was pre-term with her babies and had been told more weren’t possible. It had always been in their hearts and mind that they would expand their family through adoption. Beth says that they “left it in God’s hands. We said that if it was meant to be, it will be.”

And so, suddenly, it was.

Just 48 hours after Marc responded to the emergency call, a tiny bundle of joy wrapped in pink was coming home with them. Many might say that little Gracie was saved on the night she was born, but her new parents disagree. Marc says that they don’t think of Gracie as adopted, but rather that “she is ours, and we love her.” 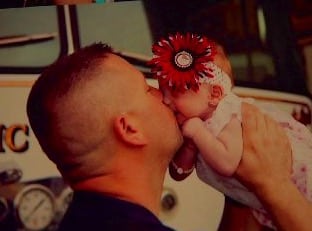 Her two new siblings have happily welcomed Gracie into the family as well. Will and Parker didn’t skip a beat taking on their new roles as protective big brothers. The entire family talked about their experience on WMBF News.

After that interview, word spread quickly and this family was blessed again, with some much-needed help from people who pitched in to donate time and supplies for a home expansion.

Contractor Buddy Satterfield led a crew who built a partition separating the Hadden dining area from the family room to create a fourth bedroom for this family who outgrew their small house overnight.

Satterfield says “it just feels good to do something relatively simple in the construction business that means so much to someone else.”

Marc Hadden is grateful to have friends and volunteers “pull together for us like this.” And the Hadden family – now a very happy five – feel especially blessed to have the new daughter they have long hoped for.