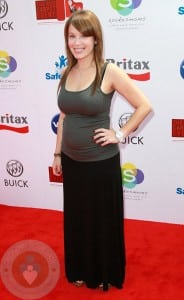 Every day, pregnancies fail, babies are born with birth defects and infants are born stillborn. Celebrities are not immune to these tragic events and they are no less scared than we are when the potential of a problem presents itself. Actress Marla Sokoloff shared her second trimester scare on People.com’s Celebrity Baby Blog.

“The moment I found out I was pregnant, I instantly felt different…My brain was completely consumed with thoughts of BABY…I knew our lives were going to change drastically, and I truly loved the thought of it. I walked around all day with a giant smile on my face, knowing I had this exciting secret,” Marla says about discovering she was pregnant.

The first trimester was pretty uneventful, according to Marla – no morning sickness and no nausea but she says, “I had the Preggie Pops and the Sea-Bands standing by, but they were never needed.”

But at 17 weeks, she and her husband, music composer Alec Puro, received the tragic news that something in her blood work looked abnormal.

“Knowing that lots of women get a ‘false positive’ on these tests, I tried to remain calm until further testing was done. (By calm, I mean hysterically crying until we got to the doctor’s office.) I was completely crushed. I was already so attached to my little girl. She has a name. I talk to her, I sing her songs…she has to be okay,” said Marla.

After a detail ultrasound, the physician recommended that Marla go in for an amniocentesis to “investigate further.”

As you might expect, Marla was pretty apprehensive about the amnio saying, “Wait – didn’t they say the needle was seven inches long?! I squeezed my husband’s hand for dear life and prayed it would be over quickly.”

The pain of the amniocentesis and the pain of worry for her baby kept Marla on the couch for the next few days. The waiting was unbearable.

“I literally couldn’t function. The thought of something being wrong with our baby was just too unbearable to even think about. The only thing in the world that I wanted was for this little girl to be okay. Nothing else mattered,” Marla shared.

It was 10 “agonizing” days later when Marla and Alec finally received the amnio results. The baby was, in fact, perfectly fine. It had been a false positive after all!

“I took my first deep breath in almost two weeks and then returned to my oh-so-familiar state of hysterical crying. Only this time, they were happy tears,” she said.

There are so many things that we don’t have control of during pregnancy. That continues, long into parenthood. Marla says that accepting the lack of control has been difficult, which is pretty understandable, considering the scare she had.

“Being pregnant has officially turned me into a worrywart…The complete lack of control hasn’t been easy for this control freak. Every day, I try my best to be calm and stay present – prenatal yoga has definitely helped me with that,” said Marla.

Her daughter also helps to remind her that everything will be okay, saying, “Whenever I start to panic or veer off-track, I feel her little kick in my belly, and I know that’s her way of saying, ‘Mom relax…everything is going to be okay.’”

We are so happy to hear that the baby is healthy and glad that Marla and Alec’s first scare is over. We wish them the very best and hope for a safe delivery.