We recently reported on the measles outbreak in California. It appears, however, that the danger extends well beyond California. In fact, five provinces in Canada and at least 10 states in the U.S. are reporting higher-than-usual measles numbers this year – some significantly higher. Even more concerning is that it appears the danger is extending beyond pockets of communities, reaching the general population by way of travel, through hospitals and schools, and even airports. 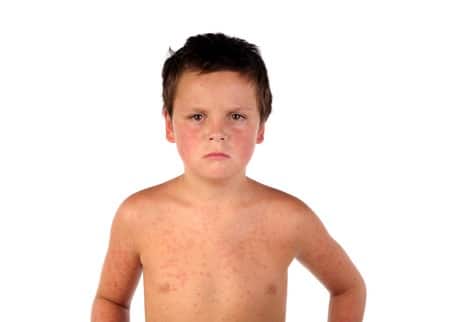 In 2011, Canada had one of the worst outbreaks since the 90’s (725 cases), and then dropped back down to just 30 confirmed cases in 2013. With more than 300 cases in just one community and outbreaks in at least five other communities, Canada may very well be looking at another record year if things continue in their current state.

In Fraser Valley East, B.C., the city of Chilliwak confirmed two cases of measles on March 8th. By March 24th, the under-vaccinated region had confirmed 228 cases. As of April 1st, the outbreak was thought to have extended to more than 300 people. Believed to have started in an elementary school, the outbreak eventually spread into the broader community. It is still thought to be sanctioned to this “pocket.” However, no one knows for certain.

Central Alberta has reported one confirmed case as well as two more possible cases of measles. Though there are only three possible cases at this time, health officials warned that the exposure could extend to several locations in Red Deer, Camrose and Stettler.

In Regina, Saskatchewan, health officials have confirmed 11 cases of measles since January. The outbreak was declared “over” on March 18th, but the health authority also stated that continued monitoring in other parts of the country would continue.

Winnipeg, Manitoba has confirmed two cases of measles, both of which were within direct contact of each other. Though seemingly small and very restricted, the outbreaks throughout other regions poses a potential threat.

In Ontario, 11 total cases have been confirmed. One of the two cases from Hamilton prompted warnings of potential exposure for the entire city of Hamilton as well as Burlington and Mississauga. All of this year’s cases seem to be mostly related to one unimmunized child who contracted measles during a trip to the Philippines.

In the United States, about 60 measles cases are confirmed each year. But 189 cases were reported last year, making it the second highest year for outbreaks since the year 2000. The U.S. also had its largest community outbreak since 1996 (58 cases). With already 89 reported cases, this year isn’t looking much better.

In New York, health officials issued a warning on March 14th after 16 measles cases from Manhattan and the Bronx were confirmed. It is suspected the spread of the disease was largely due to medical workers in hospitals not recognizing it quickly enough and quarantining patients so they wouldn’t infect others. Up to 21 confirmed cases were reported as of March 18th.

In Oregon, at least five cases have been confirmed, one of which included a warning for anyone traveling through Portland International Airport on March 24th. Linked to Multnomah County, the PDX case surfaced after the family traveled to the Philippines, only to return and discover their infant had the disease.

At least two cases have been reported in Hawaii – a location in which measles cases are rare. Prior to 2010 (4 reported cases), not a single measles case had occurred until February of this year.

While so many of these cases can be traced back to unvaccinated or under-vaccinated adults and children (particularly those that have traveled out of the country), the reality is that the disease is making an alarming comeback. This increases risk to anyone who has not been vaccinated, as well as the general population (especially children under one year of age who cannot be vaccinated).

For children, the vaccine can often be obtained for FREE. And for those concerned about the risk of autism or other conditions, it would be worth taking the time to speak with your child’s pediatrician, as well as researching both sides of the evidence regarding the “dangers” of childhood immunizations. For most, the risk doesn’t extend beyond soreness or redness at the injection site and mild fever.