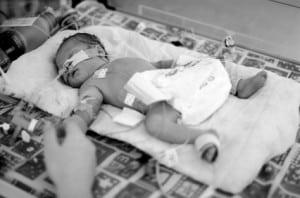 Premature infants, particularly those born before 24 weeks gestation, have an increased risk of complications. Some of these issues include Cerebral Palsy , Hydrocephalus, ADHD, digestive issues, reflux, seizures, vision and hearing problems. With premature births equaling 54,000 infant births each year in the UK alone, doctors and scientists have spent years trying to find a way to prevent a sooner than expected arrival.

Approximately 40 percent of premature births occur because of membrane rupture. The most common cause is infection but other risk factors can also cause the membranes to rupture, including amniocentesis testing, bleeding during the first half of pregnancy, multiple births and an excess of amniotic fluid.

Once the membranes have ruptured, there is nothing that can be done to preserve the pregnancy. Scientists have tried, using latex seals and blood platelets, but all previous attempts have failed. Despite the years of failed attempts, however, hope may be in the wings for would-be premature infants and their mothers.

In London, a team of doctors were able to grow a stem cell patch. Designed to fit over the rupture, the patch would be placed using a method known as keyhole surgery. Dr. Che Connon, who published his findings in the journal Tissue Engineering, stated, “It is tough and we are confident it would do the job and hold a pregnancy in place.”

The patch was created using just one donation of stem cells. “We were able to manipulate the cells to make a material that is almost the same as a woman’s natural membrane,” said Dr. Connon. He added, “From just one donation of cells after a birth we will be able to make thousands of patches to helpe preserve a pregnancy.” Human testing could start within the next two years and the team hopes to have the treatment available for all would-be premature births within four years.