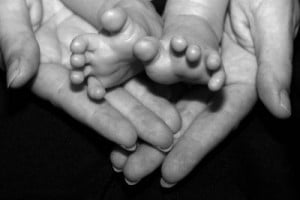 A medical hearing is currently underway in Sheffield, England, to investigate the September, 2009 death of an eight-day-old baby.  Tina Amy Irving, a premature baby, born at 34-weeks, succumbed to a rapid infection at Royal Hallamshire Hosptial.

The post-mortem determined that the cause of death had been herpes simplex type 1 (the virus that causes cold-sores) and bacterial pneumonia, with the baby’s prematurity was named as a contributing factor.  The herpes simplex virus became a systemic infection, spreading to all her organs, very quickly and led to the infant contracting pneumonia.  She died within hours.

It is believed that the baby contracted the infection from hospital staff or visitors and not from her mother, Katy Weston.

It is uncommon for a baby to contract herpes simplex 1 and when it happens, it is typically passed on from mother to baby, during birth.  In instances like this, when the mother is not infected with the virus, the baby does not have the benefit of the antibodies that are passed from the mother to the child, through the placenta.  The baby is, therefore, defenceless against the infection, making the virus very serious in young infants.

In the case of Amy Irving, the infection was fast moving and difficult to diagnose.  The day before her death, Amy was examined by neonatologist Kirsty Mackay.  She had been vomiting but Dr Mackay said, “She looked as I would expect a baby of 34 weeks gestation to look.”  Amy was “pink,” had normal movement and exhibited no signs of distress.  Tests were run to determine if infection was present, but with a 48 hour turn-around for results, she was put on antibiotics before a diagnosis was returned.

At 10:30 p.m. September 6th the baby, who had been put on new medication after a registrar noticed secretions form her mouth and nose, became worse.  Milk was removed from her upper airway, she was not moving and had stopped breathing three times.  She was moved to the high dependency unit and died shortly after.

Dr. Robert Coombs, another neonatologist caring for Amy, believes that the baby could not have been treated sooner because, “My feeling is that the herpes was not an issue until that evening.”

By the time the baby collapsed it was too late to help her.  Even if she was diagnosed, at that point, treatment would not have saved her.

Alan Weston, Amy’s grandfather, told the inquest, “I could see all the signs that she was ill on September 6.  Unbeknown to me she was dying in my arms as I was nursing her.”  Weston said that Amy’s family believed she was in pain and should have been treated earlier.

The hearing on this tragic case is ongoing and findings will come at a later date.

About 1,500 to 2,200 babies under 1 month old contract herpes each year in the United States, and untreated, the virus is fatal in up to 85 percent of cases. The majority of neonatal herpes simplex infections are caused by HSV-2, but about 30 percent are caused by HSV-1, according to the American Academy of Family Physicians.

According to Dr. Jon Abramson, chairman of the Department of Pediatrics at Wake Forest University School of Medicine, there are some things parents who have a herpes simplex virus can do to reduce the chance of passing it on to their infants. This includes washing their hands before and after touching their children and wearing masks to prevent viral transfer from the nose or mouth to the hands and then on to the baby.

“Herpes virus in a neonate is a dangerous infection.  And most parents aren’t aware.”