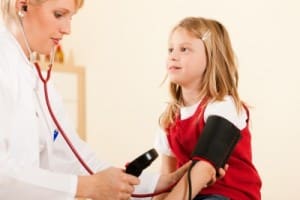 That’s is exactly what Dr. Arnaud Chiolero from Lausanne University Hospital in Switzerland and his team posed in their recent review of the recommended blood pressure testing protocols for children. The study, which was published in JAMA Pediatrics on Monday, stated that while high blood pressure in adults is responsible for more than 7 million deaths per year, less is known about how high blood pressure impacts children, both immediately and throughout their lives.

The typical recommendation, set by the U.S. National Heart, Lung and Blood Institute, is that all children over the age of three receive blood pressure screening during all physical examinations. This recommendation was also signed off on by the European Society of Hypertension and the American Academy of Pediatrics. And while a recent study indicated that a third of all doctors fail to comply with this recommendation, Lausanne University Hospitals say that there is not enough evidence to validate the current recommendation in the first place.

“It can be concluded that, for now, there is no compelling evidence in favor of universal blood pressure screening among healthy children,” the researchers wrote, according to Yahoo News.

The team reached this conclusion after taking a closer look at some previous studies on high blood pressure testing and risks in children. Prior to that analysis, they developed five questions that they felt needed to be answered before they could say, without a doubt, that blood pressure testing in children is safe and whether or not it was effective at warding off risks of heart problems and death.

Researchers also questioned if there was enough research to really validate the anxiety and stress (which can also lead to complications) that children may experience whole constantly being subjected to blood pressure monitoring. They also asked if the cost that would be incurred from more expensive and invasive tests could be justified.

Probably the biggest and most important question, however, was what should be done when a child is diagnosed with high blood pressure. Obviously, the diet and lifestyle changes could be recommended, but what about medication? The long-term effects of these drugs are still unknown, and that’s a really high risk to take with the life of a child.

But not everyone agrees with the Lausanne University Team’s conclusion. Dr. Stephen Daniels, co-author of an editorial accompanying the study and member of the group that issued the U.S. National Institutes of Health report on child blood pressure back in 2004, says that checking a child’s blood pressure is still important.

“We know if blood pressure is very high it can cause immediate problems,” Daniels told Reuter’s Health. “While high blood pressure is sometimes symptomatic, it’s not always. So it’s important to always monitor it.”

Daniels also stated that some of the questions posed by the review authors from Lausanne University would require tracking of children on into adulthood.

“Our concern is that some of their questions are essentially unanswerable, and that the studies needed to answer them will essentially never be done,” he said.

Dr. Bonita Falkner, from the Thomas Jefferson University in Philadelphia, also a member of the NIH high blood pressure report, said that she doesn’t feel that protocol should be changed based on the information found in Lausanne University’s review. She did add, however, that it may be time to review any new evidence that has been uncovered since the NIH’s 2004 report.

“I don’t think this article does much to advance healthcare in any way,” she told Reuter’s Health. “In fact, I think it’s regressive.”