The medical community is taking printing to a whole new level…three dimensional levels, that is. And the revolutionary technology is saving lives all over the world.

At Morgan Stanley Children’s Hospital in New York City, surgeons used MRI scan data to create a heart replica of a heart riddled with holes and unusually structured. The original heart belonged to a two-week-old infant born with CHD. 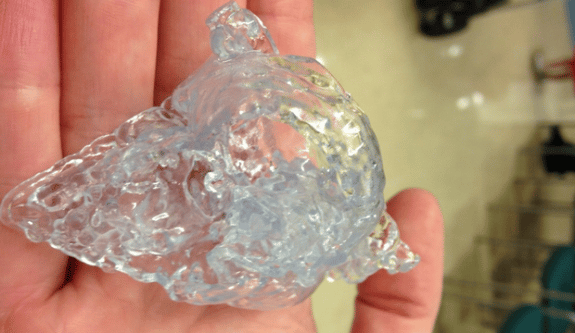 Without the replica, surgery would have been both complicated and dangerous. But with the help of the 3D printed heart, surgeons were able to study the heart and develop a detailed strategy prior to surgery. That strategy helped them provide unprecedented care through a highly successful, lower risk, single surgery.

“The baby’s heart had holes, which are not uncommon with CHD, but the heart chambers were also in an unusual formation, rather like a maze,” Dr. Emile Bacha, who performed the surgery, told Connecticut local media. “In the past, we had to stop the heart and look inside to decide what to do. With this technique, it was like we had a road map to guide us. We were able to repair the baby’s heart with one operation.”

Funded by the Matthew’s Hearts of Hope, the foundation says they already have another heart in the making. Details are said to be released next month as to the progress and the purpose of that particular heart…but even without the details, it’s clear that 3D heart imaging is changing the way medical care is provided to some of our youngest and highest risk citizens.

“This is a game changer for CHD babies with complicated heart anatomy,” Marie Thatcher, the foundations founder, told The Independent. “Normally the first time the surgeon sees the heart is when the chest is open, now they have the ability to plan out the surgery ahead of time while looking at a 3D heart of the baby or child’s heart.”

But Connecticut isn’t the only place printing hearts. In fact, just the other day, Kentucky surgeon Erle Austin credited 3D printing with improving the odds of succeeding in the most difficult surgeries.

Just like the Mogan Stanley surgery team, Austin used the technology to help him determine a safe and effective approach to performing heart surgery on a young child at Kosair Children’s Hospital. He printed a copy of the child’s heart in three parts using an experimental version of the Makerbot Replicator 2.

The technology is even being used by the NHS.

Wiltshire-based 3D printing company Replica 3DM provided 12 NHS Trust hospitals with manufacturing stations that are designed to help create replica hips for surgeons to practice hip replacement surgeries. And, last month, a scientist at Nottingham Trent University used 3D printing to produce a prosthetic human heart, saying it’s “as close as you can get” to the real thing.