Former Spice girl, Melanie Chisolm, showed off her growing belly during an interview with her former bandmate Melanie Brown.

Sporty Spice, who is five months pregnant with her first child, was a guest on The Paul O’Grady Show, which was hosted by Mel B yesterday while Paul is on holiday.

Walking on stage, Melanie C proudly showed the audience her burgeoning baby bump before sitting down on the sofa for some social time with her former bandmate-turned-interviewer. 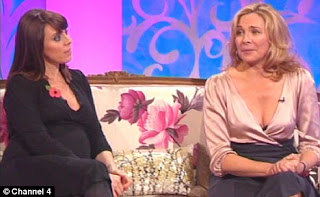 Melanie and her long-term love Thomas Starr are expecting their baby in March.

As the two singers talked babies during the show, the mom-to-be revealed she has been given the chance to give birth with the same obstetrician as the other Spice Girls.

Mel C had been introduced to the doctor as the 2007 christening of Geri Halliwell’s daughter Bluebell.

At the service, he joked to the then-unpregnant Chisholm did he want her ‘to complete the full set’ before he retired.