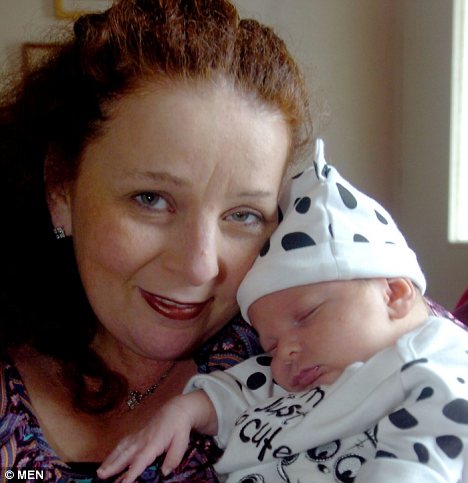 Like a scene from 50 First Dates, Karen Wilkinson-Wigham, 37, needs to keep a “mummy diary” so she can look back on it and remember the baby that she forgets giving birth to.

Karen has short term memory loss and every few days forgets what has happened prior. This diary ensures that she will not forget anything about her baby George and his life growing up.

‘My diary is so important to me because when George is older and asks me questions he will have everything written down for him.’

She added: ‘It is also helps me too.’

On Christmas Day in 2005 Karen began feeling ill and was suffering from severe migraines. A few days later she fell into a coma where doctors told her family that if she did awake, she would be left in a vegetative state. However, Karen amazed them and came out with only short-term memory loss.

During the following months, Karen focused on learning how to walk again and re-establishing her relationship with her fiance Brian all over again.

Despite the almost full recovery, Karen was given the devastating news that she never get to be a mom. Just before she was due to have a hysterectomy, an ultrasound revealed that she was actually 20 weeks pregnant.

‘I was terrified it was cancer at first, so we were so elated it was a baby and were were out straight away buying baby clothes and all sorts for him.’

Just a few short days before the baby was supposed to be born an ultrasound had revealed that their baby boy Joshua had passed away.

Shortly after Karen became pregnant again, but sadly her second child, Georgia, who was born still.

Karen said: ‘I can’t recall much about it but I feel sick because the emptiness and pain at such a terrible loss are still there.’

Last year, when Karen became pregnant again, she began writing down when she felt her baby kick and had scans when she could not remember the last time she felt movement.

The happy couple were blessed with the birth of baby George last month weighing a healthy 7lbs.

Karen said: ‘After so many nightmares, I can’t believe Brian and I have a healthy baby. The diary will help me remember.

‘I have a strong Christian faith and a wonderfully supportive family – my mum is constantly at my side helping me care for George.’

She added: ‘Now, I don’t let it all get me down. Instead, I feel lucky I’m alive and have been blessed with such a beautiful baby.’

I cannot even imagine what it would be like to forget your child every few days. To not remember things that are so special and important. She is an amazing woman!