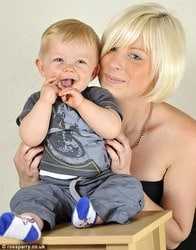 A brave ten month old has amazed everyone by surviving unscathed from a bout of meningitis which caused him to have seven heart attacks in one night – including one where he was lost for 12 minutes.

Parents Sade Jackson and Phillip Cawley talk about their ordeal and how they were told there was little chance their son Ivan after the deadly disease left him temporarily paralysed and hooked up to a ventilator.


“Everything was fine. I’d had no complications in pregnancy and he was born a healthy seven lbs one oz. We were settling in to being first-time parents.” the toddler’s mom  said

“It was a Sunday night and we put him to bed as normal and he was fine. But then when he woke up at around 4:30 am he was drenched with sweat and his skin felt like it was on fire but at the same time he was shivering. It was really scary. We waited for the Doctors to open and took him down straight away.”

Once they arrived at the hospital doctors noticed that he was starting to develop rashes all over his body. At this point they transferred him to the ICU.

It was here that he had seven heart attacks in the span of one night.  But the Doctors never gave up hope and were only able to keep Ivan breathing by performing CPR then attaching him to a life support machine.

“We lost him for 12 minutes during one of his attacks but amazingly he even pulled through that. It was a really horrible time. It was awful seeing our little baby lying there with all these tubes coming out of him and looking so ill and weak. We were told that the worst could happen and to be honest we just thought he wasn’t ever going to come round”.

Brave little Ivan refused to let go.  The efforts of the Doctors involved and Ivan himself he was able to pull through the night and he is now quickly recovering at home.

“He’s all over the place now. He has even started to crawl since we have had him back at home. He just has one more check-up at the hospital to go and then we’re totally in the clear. It’s amazing”.

Meningitis is an inflammation of the protective membranes covering the brain and spinal cord, collectively called the meninges.  The disease may be caused by infection with viruses, bacteria, or other micro-organisms and can be life-threatening because of the inflammation’s proximity to the brain and spinal cord; therefore, the condition is classified as medical emergency. Meningitis is potentially life-threatening and has a high mortality rate if untreated; delay in treatment has been associated with a poorer outcome.

Lucky for this family they were able to get their son to the hospital so that he could treated quickly. – Jeff, Staff Writer