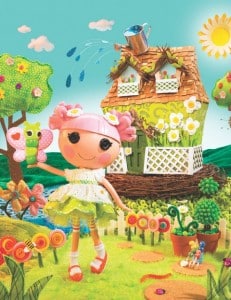 Hailed as 2010’s “hottest toy of the season,” (CBS The Early Show), “the year’s Tickle Me Elmo,” (MSNBC) and described as “creating Cabbage Patch-like hysteria among Holiday shoppers,” (New York Post), Lalaloopsy™ takes girls on a magical journey to a whimsical world of imagination. A unique collection of 13”dolls that magically came to life when their very last stitch was sewn, each Lalaloopsy™ was born on a special national holiday and has her own personality developed by the fabrics used to make her. Designed to encourage a child’s imagination and creativity, Lalaloopsy™ teaches important life lessons such as diversity, individuality and the idea that everything can be recycled and nothing should ever go to waste.

New for Spring, MGA is introducing 3 new characters including a little boy!

In addition, MGA Entertainment is currently in development for the first-ever Lalaloopsy™ feature length movie. This made-for-DVD feature will be released in spring 2012 and will star the original Lalaloopsy™ characters.

Visit the colorful 3D world of Lalaloopsy™ at www.lalaloopsy.com where Lalaloopsy™ magic is everywhere!