Just three months ago, little Emily Cressey and her mother, Claire Cressey, started their harrowing journey together. For Emily, the journey was all about survival. For Claire, it was about waiting and hoping that her daughter would grow and thrive.

“To this day, I will never know why I went into labor early, throwing us into a nightmare,” Claire told Daily Mail UK. “Our much-wanted fourth child was supposed to arrive on June 16, but instead, she had other plans. My waters broke without warning on Sunday, February 23, sending me into a state of panic.”

Her panic was definitely justified.

“I now understand the despair that some parents must go through when their baby is born at 23 weeks or earlier and is allowed to die,” Claire said. “It was with relief I counted she was exactly 24 weeks that day, and [I knew] at least my baby would be given a fighting chance, whatever was about to happen. A day earlier, and it might have been different.”

Armed with that knowledge, Claire rushed off to the hospital. Doctors gave her a series of steroid injections to try and accelerate Emily’s lungs, but then sent her home because she wasn’t having contractions. But she knew, eventually, they would come. When they did, they came on with a vengeance.

“It was a horrible waiting game, but when my contractions finally came, everything happened terrifyingly quickly,” she said. “We’d known that Emily was in the breech position, and by the time we reached the hospital 50 miles away, one of her feet was sticking out.”

Less than two minutes after getting into the labor room, Emily was born.

“To all intents and purposes, it was a ‘normal’ birth, except my baby was coming far too early. But there she was, my little Emily Grace, weighing just one pound, three ounces, and our lives would never be the same again,” Claire said.

Concerned that she couldn’t hold her own body heat, combined with the fact that she was too small for the incubators, doctors decided to try a surprising technique to save Emily’s life. They placed her in a sandwich bag, just like the plastic zip lock ones bought at a grocery store. 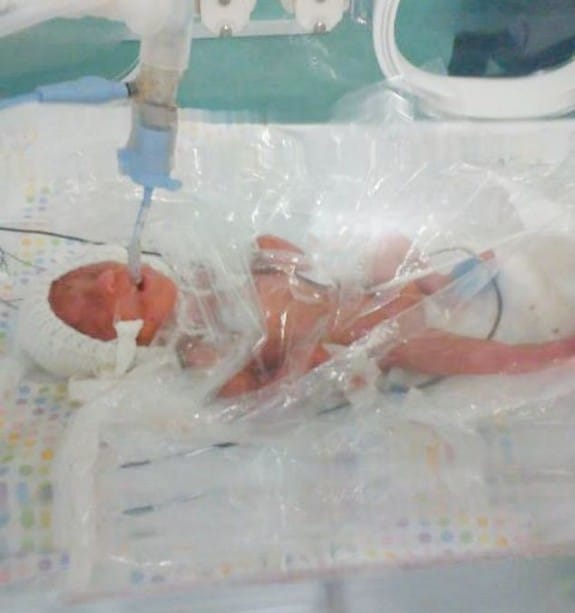 “To my surprise, she was put into a sandwich bag straight away,” Claire said. “It’s like a little insulation jacket that helps them maintain body temperature because they lack the body fat to stay warm.”

But that life-saving technique, along with tubes and a ventilator, meant that Claire didn’t even get to see or her daughter until an hour after the delivery.

“I didn’t have time to see or touch her before she was taken away to the neonatal intensive care unit. I was sick with worry, not knowing if she would live or die,” Claire said. “It would be an hour before I saw my daughter for the first time – and instead of that feeling of instant, overwhelming love, I felt panic and horror that she was so small. Surrounded by tubes and on a ventilator, I prayed she would be okay, but it was impossible for anyone to know what would happen next…Seeing her lying there was every mother’s worst nightmare. Her skin was transparent, her eyes were fused shut, and her little hands and feet were still webbed.”

Emily’s situation was so uncertain that doctors didn’t even give her parents a prognosis. Afraid to know, Claire and her long-time partner, Alan Coultas, didn’t ask. They sat by her incubator, unable to touch her, unsure if their daughter would live or die. But day by day, Emily fought, making little gains along the way.

“We couldn’t touch her and spent hours sitting by her incubator. As she made it through the first 24 hours, then the first week, we began to allow ourselves to think that she might pull through,” Claire said, but adding that they knew Emily wasn’t out of the woods yet. “By two weeks, Emily had already needed two blood transfusions. Still nervous, we decided to have her baptized, in case the worst happened…As the days passed, everyone kept saying to us, ‘That’s her through the danger point.’ But that’s not always the case with premature babies. It’s not unusual for their little bodies to become tired at three weeks and they die.”

The fight was so nerve wracking that Claire, who had been released home to be with her three older daughters (Caitlin, 8; Millie, 4; and Brooke, 17 months), slept fully clothed “in case the call came to say she was deteriorating.”

But then, one month after delivery, Claire finally had the chance to hold her daughter. As fate so had it, that blissful moment would happen on Mother’s Day.

“She’d finally opened her eyes and I was getting to hold her for the first time,” Claire said. “I enjoyed the wonderful moment I never thought I would see. It was an absolutely amazing feeling.”

Then came another milestone. Though still in an incubator, Emily’s weight had reached 2lb, 5oz by the time she reached six weeks, and she could finally be dressed for the first time. After that, there would be another important gains, as well as a lot of little steps along the way.

“I could see small but significant changes as her tiny hands and feet developed properly,” Claire said. “Her condition continued to improve so much that, by nine weeks, Emily was finally transferred to Borders General Hospital, just half an hour from our home.”

But after the transfer, Emily’s parents would receive some heartbreaking news. Emily has a heart murmur. At some point, she will need surgery to repair it.

“The reality of being born at 24 weeks is starting to sink in,” Claire said. “The worry of long-term effects and wondering what the future holds for Emily is frightening.”

Yet all that fear and all those concerns make those special little moments – like being able to feed Emily from a bottle and give her a bath for the first time – that much more special.

“Those were beautiful moments most mothers take for granted, but after fighting for so long to keep her alive, it was a very precious time,” Claire said.

And, little by little, the machines are disappearing. Emily is now allowed to sleep in a regular crib instead of an incubator. And, though Claire says that will “take a bit of getting used to,” she couldn’t be happier knowing that their daughter will soon be home.

“We are incredibly proud and in love with her,” Claire said. “Her strength and determination are nothing short of amazing. She has fought amazingly hard to stay with us.”