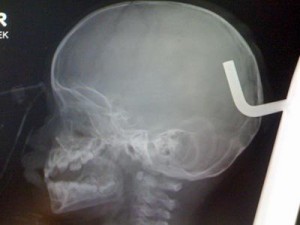 A North Carolina toddler has amazed everyone by recovering from a potentially life threatening injury.

Doctors thought there was no chance of survival when 17 month old Jessiah Jackson arrived at the hospital with a metal rod lodged in his head.

Jessiah was playing outside last week when he tumbled from his chair and landed on a rod that was attached to a pressure washer on the ground. The metal rod embedded two to three inches into his skull. The toddler’s fast thinking uncle kept his head still while a neighbor who is part of the community’s rescue squad cut the rod from the washer.

Jessiah was airlifted to a Wilimington hospital and then airlifted again to UMC Hospitals where neurosurgeon Anand Germanwala told family members the grim outlook of the situation. The angle was difficult and the rod landed near the major artery of the brain. He feared removing it could cause Jessiah’s brain to bleed, which would likely cause death or a severe stroke. The doctor told the family to pray. 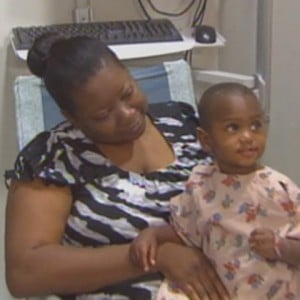 The surgery lasted two hours, and was a complete success.

“I think we had a lot of help from above, and fortunately, everything went well,” Dr. Germanwala said. “I think he is a miracle baby.” Little Jessiah amazingly shows no signs of long-term brain damage, but is taking antibiotics to prevent infection.

As for lasting effects, the rod punctured a part of the brain called the left occipital lobe, responsible for vision on the right side. So far, examinations by ophthalmologists have been unable to find any evidence of damage to the toddler’s eyesight. Further tests are planned for the coming weeks.

He is scheduled to go home tomorrow. – Jill, Staff Writer