Colvina Jolina suffered a massive brain hemorrhage when she was 23 weeks pregnant and went into a coma lasting three months, a medical event so severe that at one point doctors estimated her chance of survival at just 10%.

When this comatose woman went into labor six weeks later, doctors delivered her daughter Maia by cesarean section. The baby weighed just 3 lbs. and was herself in fragile condition. Doctors had to resuscitate the infant twice and she was put in an incubator and carefully monitored. 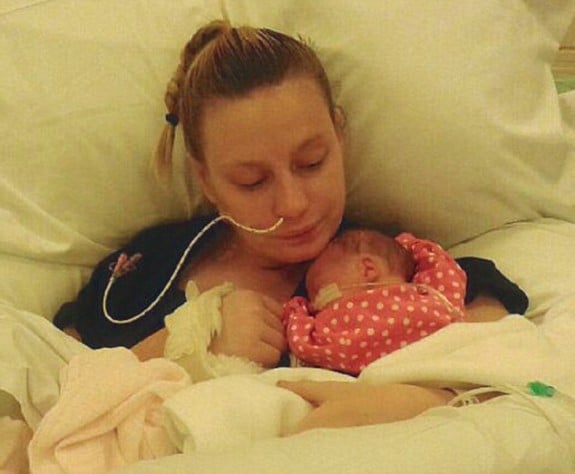 The first-time, 28 year old mother was in intensive care nurse who had been in good health throughout her pregnancy until the day she felt “an intense headache” while doing housework. She cried out to her husband Matt before passing out. Rushed by ambulance to Queen Alexandra Hospital, she was met by staff who were shocked to discover a colleague in such a severe crisis and who quickly realized that Colvina needed immediate brain surgery at Southampton General – 22 miles away.

Colvina’s brain bleed was huge and had pushed her brain sideways against her skull and downwards toward the spinal cord. In her condition even the hospital transfer was perilous, but with no better option she was rushed to Southampton and taken straight to the operating theater where her skull was opened to relieve pressure and the massive clot was removed.

Neuro intensive care consultant Dr. Andy Eynon explained that the “massive pressure of the blood build up had forced the brain down onto the brain stem controlling Colvina’s breathing, heart function and blood pressure.” Doctors feared the pressure could affect blood flow to the womb so their dual concern was saving Colvina’s life and making sure the pregnancy wasn’t harmed. Husband Matt was told by the neurosurgeon that Colvina was operated on “very quickly, but I have never seen anyone survive this.” Matt says that was the worst moment of his life, realizing he could lose both his wife and their unborn child.

Following surgery, Colvina’s condition stabilized, but she remained in a coma. Doctors didn’t know if she could hold on to the baby. It’s very rare – Dr. Eynon could site only three cases – for a woman in a coma to deliver a baby. Even from her coma, over the following weeks the young woman was seen moving her hand as if to rub her baby bump.

Seven weeks after baby Maia’s birth, Colvina started showing signs of regaining consciousness. Waking, but still unable to speak, she tapped her wrist and mimed rocking arms to signal to staff that she knew she had given birth and wanted to see her baby.

A year later, little Maia is crawling around her parent’s home in a pink romper suit and her mother remains deeply grateful for the medical expertise that saved them both, saying “it’s a miracle that we both survived.”

Colvina’s rehabilitation consultant says that the young mom has “done brilliantly” and has learned to walk again, although she still has persistent muscle weakness on one side of her body and is struggling to regain perfect speech. It’s apparent she is driven by wanting to care for her baby herself, and that the little girl she has no memory of birthing continues to give her new goals to achieve.