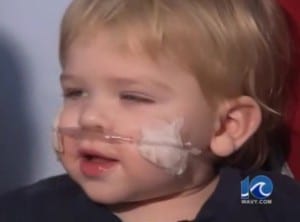 A Virginia Beach toddler is being called a miracle toddler after surviving his near drowning ordeal. The toddler was pulled from a pond by his mother and saved by a unique medical treatment.

Shannon Brown learned the hard way why you can never take your eyes off of a toddler. In the blink of an eye, 15 month old Landon Miller had made his way out of the house and down to the small pond in the backyard. By the time he was found he was not breathing. Despite CPR treatment from a neighbor, the chances looked slim for the bright eyed toddler. Still unresponsive, he was rushed to the hospital where Doctor Alia Iqbal was working.

“I remember thinking on New Year’s Day I’m about to devastate this family,” Dr. Iqbal said.

Despite the odds, there was still a hope that Landon could get better. That hope rested on an unusual treatment from Dr. Iqbal. The tiny toddler was frozen, forcing his body to go into a coma. For ten days, the toddler laid in bed unmoving. Then, he opened his eyes. 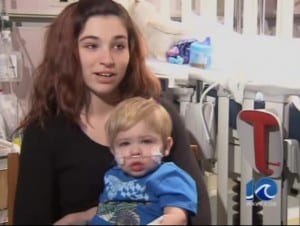 Doctors believe Landon will make a full recovery from the drowning. What should have killed him, was saved by the induced coma and lowered body temperatures. In this state, his body was able to work to heal itself.

“When I actually saw him a week later, he was sitting in his crib,” Dr. Iqbal said. “I leaned down just to say ‘hi’ and he reached out and felt my face. Far and away it makes every sleepless night worth it.”

Shannon Brown is just thankful for the way the things worked out. Her neighbor had just gotten his CPR training recently, without knowing how much it would come in handy. And finding themselves in front of Dr. Iqbal meant Landon was more likely to get the treatment that saved his life. – Summer, staff writer