When baby Sebastian was born – pink and screaming – at Toronto’s Mount Sinai Hospital in May, his mother says that it was “the most amazing sound that I ever heard.”

Kristine Barry had been prepped to expect a blue baby that was not vocal, because her son had a serious heart defect that causes a lack of oxygen. In similar cases, infants with this defect are racing the clock for survival in the moments following their birth. The lack of oxygen can cause brain and organ damage. Under these circumstances the birth process is more difficult and traumatic for both the mother and the child.

During regular prenatal checkups, Barry learned that her baby had a severe congenital heart defect in which two main arteries of his heart were reversed. Making this case especially complex was the fact that the interior walls of the heart were sealed shut, so blood couldn’t flow between the chambers to pick up oxygen.

Dr. Greg Ryan, head of the fetal medicine program at Mount Sinai says that “we had a baby with two sides of the circulation that weren’t communicating. There was no opening between the upper and lower chambers and vessels were coming off the wrong side.”

The closed walls of Sebastian’s heart made it impossible to automatically circulate oxygen once he lost access to oxygen supplied via the placenta. There would be very little time to save him once he left his mother’s womb.

On May 18, Dr. Ryan and dozens of clinicians from Mount Sinai and partner hospital Sick Kids performed a risky and remarkable surgery on a baby still in his mother’s uterus. Five days before his birth, little Sebastian underwent a balloon atrial septoplasty. 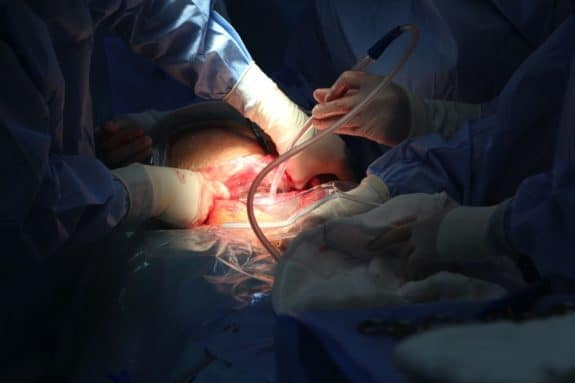 Surgeons used a needle to insert a balloon through Barry’s uterus and into the baby’s heart. The procedure makes a small hole to open the heart’s interior wall so oxygenated blood can flow through.

Knowing there would not be a frantic race against time to save her child, Kristine gave birth five days later with Sebastian’s father there to proudly cut the cord. That same day, surgeons repeated the septoplasty procedure to further ensure the flow of blood.

A week later, Sebastian had open heart surgery to repair his reversed arteries. The scar he carries will fade in time and there should be no limitations to his continued growth and good health.

Two months after his dramatic entry into the world, nobody looking at this laughing baby would guess that he once had a life-threatening health issue.