Home » Modern Dads Do Diapers, but Not Baby Talk, and It’s Not a Bad Thing, Experts Say

With each generation, the line between gender roles fades just a little more. Today, it’s not uncommon for dads to stay home and moms to work. And dads change diapers, cook, clean, fill sippy cups, and play peek-a-boo. But according to a new study by researchers at Washington University, Spokane, there is one thing that dad’s DON’T do. 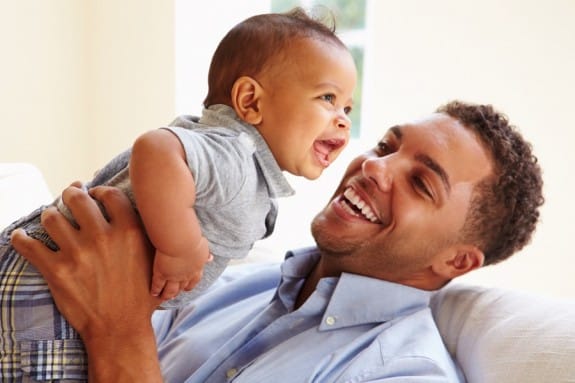 When mothers talk to their infants, they tend to use high-pitched tones and varied cadences otherwise known as “motherese.” It’s a sing-song type of talk, and it is thought to be a bonding tool, a form of communication that young children find quite engaging.

After an intensive study of 11 families with toddlers about 2 ½ years old, which are part of a larger pool of 120 families that have provided more than 2,000 days of data for analysis, researchers have found that dads don’t use this same sort of talking with their children.

“Moms raised their pitch by around 40 hertz,” a verifiable change in sound, Mark VanDam, a WSU-Spokane assistant professor in the speech and hearing sciences department, told Seattle Times. “Dads had no statistical effect at all.”

In fact, dads tend to speak to their children more like they talk to adults, researchers found after analyzing data from a voice-recognition device that had been tucked into the shirts of participating toddlers.

But the lack of “motherese” from dads may not actually be a bad thing, the experts say.

“We think that the fathers are doing things that are conducive to their children’s learning, but in a different way,” VanDam said. “Moms provide the link to the intimate or the domestic. Dads provide a link to the outside world.”

VanDam also noted other important differences in the way that mom and dad communicate with their toddlers.

“Moms talk a lot more, both in overall words and in minutes of talking,” he said. “Dads use fewer words, [but] they use a wider variety of words.”

Tonya Bergeson-Dana, assistant professor at Indiana University Medical School, who runs the Babytalk Research Center, said that this study falls in line with much of what’s already known about parent-child communication.

“Even in singing to babies, moms will sing ‘Twinkle, Twinkle,’ and ‘ABC’ and dads will sing rock songs,” Bergeson-Dana told Seattle Times.

In the end, VanDam said that both forms of communication are important. Neither is better or superior; they’re just different and they serve different purposes in the child’s long-term development.