Home » Molly Sims Reveals She Is Having A Boy! 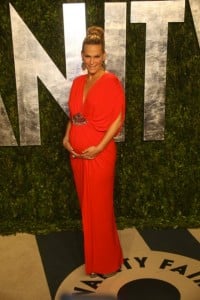 Mom-to-be Molly Sims appeared on The Talk today and revealed she is expecting a baby boy.

“I’m going to make a little announcement. Everyone has asked me,” the actress told the show’s co-hosts.

“The only reason why I’m telling this is because we can’t make a decision on the nursery. We are having a baby boy!”

She added, “I know [my husband Scott Stuber] would have been so excited with a girl but he is such a sports freak — he is so happy.”

The baby boy will be the first child for the couple, who were married in September.  When they announced they were expecting in January they also shared that their ‘little bundle of joy is a honeymoon baby, due at the end of June.’