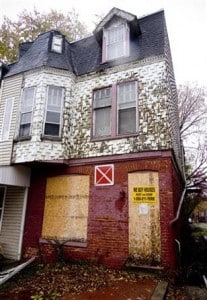 A couple accused of hiding and abusing five children has just gave birth to their sixth child, ten weeks early. The new baby has caused a stir as the family has been able to deny the existence of their other children for over 13 years.

Louann E. Bowers and her boyfriend have six living children, ranging in age from 13 years old to a newborn. The family has made headlines as the children have finally came into the light. Authorities have been searching for the older five children since 2003. Until now, the family has lived in squalor conditions in a home marked for destruction. They had no running water, no heat, and a roof that leaked.

Bowers herself was reported as a runaway in 1993, when she ran away with her uncle and boyfriend, Sinhue A. Johnson. She was found once by police, but stated that she had only wanted to be left alone. However, tips to the Child Protective Services in 2003 brought the authorities looking for her again. Despite repeated searches, the family managed to avoid being discovered by the police.

The children are now in protective custody, while Bowers and Johnson are in jail awaiting a hearing on five counts each of child endangerment. They have been denied custody and visitation with their children. However, the mother remains hopeful that she can be reunited with her children again.

“I know she’s getting close to taking her GED,” Defense attorney Ron Gross said. “When I see her, she’s in good spirits and is very focused on getting her children back and putting this behind her – and forging some type of relationship with her family.”

The family managed to keep their children from being found by avoiding any records that would create a paper trail. None of the five older children had birth certificates, vaccination records, or had ever attended public schools. No evidence of homeschooling was found either, and each child was below level from where they should have been.

Officials said that the children are now attending school and receiving medical care. Their lives have greatly improved now that they have access to services that can help them. The youngest, still in the hospital due to the premature birth, will be released into foster care as well and is expected to do well. – Summer, staff writer