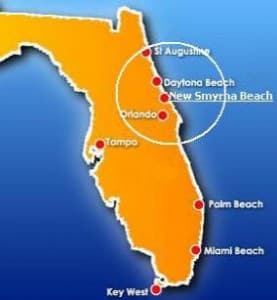 Police arrived at the New Smyrna Beach home of Erica Hess after a neighbor had called and said that a small child was on top of the roof. When officers arrived, that is exactly what they found – a two-year-old in nothing but underwear on top of the roof with a small dog.

As the sergeant stood and watched, the toddler tried to crawl through a “makeshift” wire barrier that surrounded the deck and onto the roof of the two-story house.

According to the report, the sergeant had to make multiple attempts to contact someone inside the house. After 15 minutes, Erica finally emerged. She came onto the deck and picked up her daughter.

Police questioned Erica on how her daughter had gotten onto the roof.  Erica told officers that she had been moving a dresser while the little girl sat on a bed in the other room. At first, she told them that she had kept her daughter within eyesight the whole time, but then changed her story and said that she had gone to the restroom and closed the door.

She claims that she had only been in the restroom for about five minutes and that she had no idea her daughter was on the roof until she saw the sergeant standing in her backyard. Erica also denies that anyone else had tried to contact her regarding her daughter’s predicament, despite the fact that her neighbor says they had tried to contact her before calling the police.

The only part of Erica’s claim that seems to be completely truthful is that the little girl actually knew how to climb through the barrier. This may be valid simply based on the fact that the report indicated the little girl had several small scratches on her stomach and legs.

Officers decided to arrest Erica on charges of child neglect. She was taken to the Volusia County Branch Jail and then released after her first court appearance on Wednesday. During that time, the child’s grandmother took over the little girl’s care.

I’ve mentioned it before and I’ll say it again: little kids get places they’re not supposed to be…FAST! And while it is okay to let your toddler play independently, it’s essential that you check on them frequently and have them within eyesight (or at the very least, earshot). Thankfully, this little girl is okay, and hopefully mom fixes that makeshift barrier so that her daughter can’t get through it.