Jewell Anderson got a surprise when yesterday when she changed her daughter’s diaper and found a bullet. 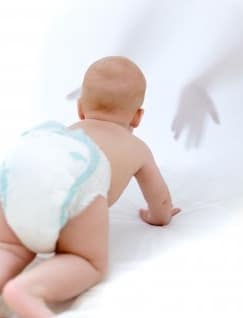 The new mom, who was having trouble calming her daughter down while in church on New Years Eve, took the crying 7-month-old to the bathroom, where she discovered a different kind of surprise in the baby’s diaper. “The bullet fell out.”

Police believe that the stray bullet that lodged itself in the child’s diaper may have been fired from a reveler’s gun outside in the surrounding neighborhood. The church’s metal roof and ceiling surely slowed the speed of the the bullet.

“When I saw that bullet, all I could do was just scream,” said Anderson.

Memphis Police say they’ve found stray bullets in unusual places before – reminders of how dangerous carelessly firing weapons can be.

The bullet left a hole in the sanctuary ceiling, and numerous church-goers said they’d seen something falling from above.

This baby is very lucky to have escaped without injury.