Paula Mbonda’s labor started much like any other woman’s – intense contractions starting around 3:15 in the morning. But there was a bit of a problem: the roads outside her Pickering home were slick with ice, and much of the town had been hit by a power outage due to the storm. She and her husband, Al Mbonda, had a difficult decision to make. 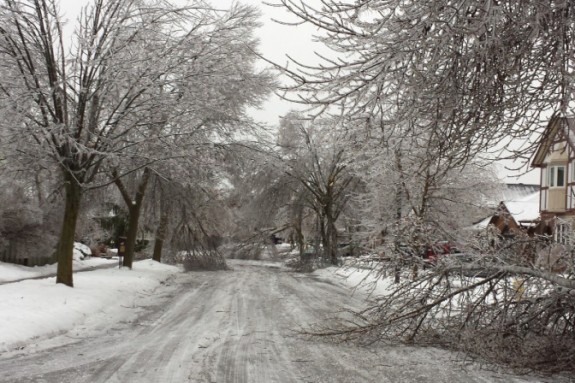 They decided to de-ice their car and brave the icy roads, but after calling their midwife, they learned that the situation was even more dangerous than they’d realized. The nearest hospital had been hit by the blackout as well, and if she wanted to give labor in a hospital, Paula would have to do so by flashlight.

The contractions were coming harder and closer together. They had to decide between the icy roads and hospital without power and a home birth. Both Paula and Al agreed that driving to the hospital was worth the risk, even if there wouldn’t be power when they arrived.

“I thought we should just try Ajax,” Al, who couldn’t help but take into consideration the fact that the harrowing birth of his son eight years prior had only been a success because of doctors at a hospital, said. “I was very scared of having a home delivery.”

So the couple made their trek to the Ajax hospital, driving over patches of ice and slick roads. Paula distracted herself by thinking of “funny names” like Storm and Ice. After a half hour (which Al said felt more like two hours), they reached the Rouge Valley Ajax and Pickering hospital.

They could barely see as they entered the hospital, so nurses led the couple by flashlight into the birthing room, which was lit only by a small, battery-powered lamp in the corner. Flashlights helped the staff see a little better during the delivery, but it was still oddly dark for a hospital room.

“That might seem a little confusing,” she said. “But I did feel like I was in good hands just because I had made it there and they did have flashlights.”

Other than it being dark, the delivery went much like any other. The midwife arrived, and within minutes, their eight pound baby boy was born.

“His face is a little bruised from a fast delivery, but otherwise [he’s] OK,” Paula said.

From the time she woke up to the moment her son was born, Paula’s ordeal lasted only about an hour. And, despite all the oddities and potentially dangerous moments throughout the birth, Paula said the only time she’d felt nervous was during the drive.

“I was scared I was going to have the baby in the car,” she said. “But my husband drove safe, he did everything right, he was calm, the midwife was calm. So I had to be calm too.”

Oh, and despite Paula’s distracting name game in the car, the couple ended up going with a name completely unrelated to the birth itself. Their son, born at 4:40 in the morning, ended up being named Pearson after his mother’s favorite place in the world.

“Before I turned 30, I traveled to 30 countries and my favorite place in the world was Pearson Airport,” she said.

As she recovers in the hospital, she says that she can’t help but think of how interesting it will be to retell Pearson’s birth stories in the years to come. In fact, she almost seems grateful for the hectic delivery.

“I think it would’ve been boring to have him in any other way,” she said.