Home » Mom Delivers Own Baby At Home On Mother’s Day 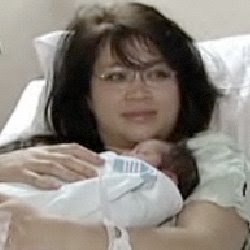 A Chicago, who wasn’t due to 2 weeks, surprised everyone by delivering her own baby at home on Mother’s Day.

Catherine Harris woke Sunday morning at 2 a.m in labor. She told her husband they needed to get to the hospital, but when he left to quickly call 911 she delivered the baby herself.

When Alan Harris returned he “couldn’t believe his eyes that the baby was there and actually in her arms already.” He had only been gone for four minutes when his second child, a little girl they’ve named Ariana, decided to make her dramatic entrance.

It wasn’t until Catherine got to the hospital that she realized it was Mother’s Day.

“It’s already amazing to give birth, but this is the most amazing present that I could have ever gotten on Mother’s Day,” she said.