Siobhan Anderson and her husband, Bryan, weren’t expecting their twin baby boys until Friday, but when Siobhan’s water broke at 5:30 Saturday morning, they knew it was time to head to the hospital. Heeding their doctor’s advice, the couple didn’t rush and they didn’t panic; they packed up what they needed and hopped in their car about 7 a.m. Before leaving, Siobhan’s mother joked, “You’d better not give birth on the Northern State Parkway.” 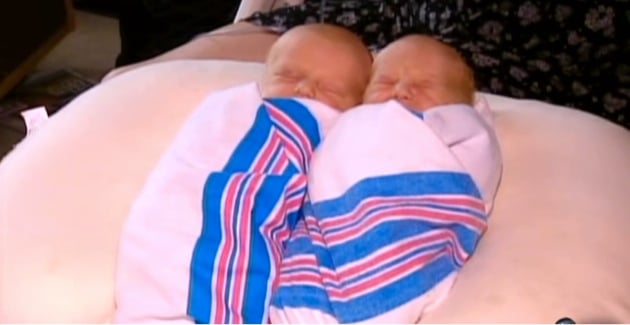 Resembling a child’s spirit to the fullest, the twins apparently heard their grandmother’s warning, and chose two other highways instead.

Bryan had just pulled onto southern State Parkway when Siobhan felt a really big contraction. That contraction was followed by the feeling of the baby’s head. Siobhan told her husband that they couldn’t make it to the hospital, but he seemed to be in a state of denial at first.

“She kept screaming, ‘The babies are coming,’” he said. “I was like, ‘I think we have time to at least get to the hospital.’”

Siobhan told Bryan to pull over near Exit 30. It was here that he called 911, and they waited for paramedics to arrive.

When EMTs arrived, Siobhan tried to insist that she couldn’t move from the car. She told them that she was “holding the baby in,” but they didn’t believe her. They told her that most emergency births weren’t immediate, and they helped her out of the car. They would soon learn that Siobhan knew her body much more than they anticipated.

“They were helping her out of the car and into the stretcher, and that’s when Gavin was born,” Bryan said. “Born right there on Southern State Parkway.”

With 6lb, 12oz Gavin now delivered, paramedics loaded mother and baby into the ambulance. With Bryan following in his car, they headed towards the nearest hospital. To calm himself down, Bryan called his brother-in-law on the way.

“You don’t think at the time that this is the way they used to do it back in the day,” he said, adding that it was “very scary” to watch his wife go through labor without any pain medication.

Then, suddenly, just 10 minutes into their trip, the ambulance pulled over to the side of the Wantagh State Parkway. Confused, Bryan hopped out of his car and headed towards the ambulance. The EMTs told him that “baby number two” was on its way and they allowed him to climb into the ambulance to watch the delivery and be with his wife.

“I sat right behind her,” he said. “It was an unbelievable experience.”

Finally, mom, dad, and both babies arrived at the Nassau University Medical Center.

“We were just in shock,” Siobhan says about the experience. “I’m still in shock that it happened. I can’t believe I was able to do that.”

She admits that the scariest part for her was delivering without the help of medication; she had planned to receive an epidural before delivering. But, she was much stronger than she’d ever imagined, and all is well. She, Gavin and Declan are said to be set to return home on Friday.