Home » Mom gives Birth as the Family Home Burns Down 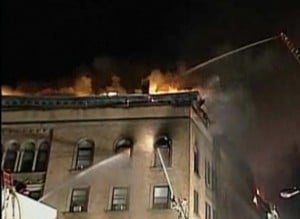 The Cintrons could never have imagined that the day of birth of their baby boy would become such a significant day of their lives. Because just as the newborn was arriving into the world, their home had caught on fire and the whole family would have been caught in the blaze if not for the birth happening at that precise moment.

On Tuesday night the Cintron’s fifth-floor condo on Main Street in Fitchburg caught fire. Jessica Cintron was at that time nine days overdue and went into labor.

“We had heard that the roof was engulfed and we are on the top floor, the fifth floor, so I panicked. I absolutely panicked,” said Jessica.

Luckily Jessica was at the hospital where she gave birth to Mason at 6:22 p.m. Tuesday, a healthy 7 pounds, 14 ounces.

When Elmer, her husband went to check their home afterwards, he found that nothing could be saved from the fire. 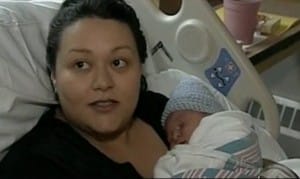 What was more painful for the new parents was that they had been preparing for months for the babies arrival buying new clothes and baby products.

“She’d been picking out clothes, you know, this is what he’s going to wear this time … She had it all set and it was just beautiful. Everything was brand new. The room was just perfect,” said Mason’s uncle, Fred Perez Jr.

When the news of the tragedy spread and friends posted words about the incident on facebook, what turned out to be a greater miracle was the way people poured in with gifts of clothes and toys.

“It’s overwhelming. I can’t believe how many people have stepped up. It’s just so amazing, and we feel so lucky,” Jessica said.

For the Cintrons it seemed that the birth of their baby boy brought in an extra dose of love and luck from unexpected corners.

They even chose his name considering the way he became the rock of the family during tough times.

“He’s the rock of our family and we’re so blessed that he came into our lives at such a hard time. And he’s the one who’s going to keep us grounded,” Jessica said.

The Cintrons are now starting from scratch and wish to share the donations they have received with the forty six other families who lost everything in the fire.