What started out as a quest for just ‘one more’, has ended in a very rare birth for a Hawaiian mom, and many more babies that she had originally planned for! 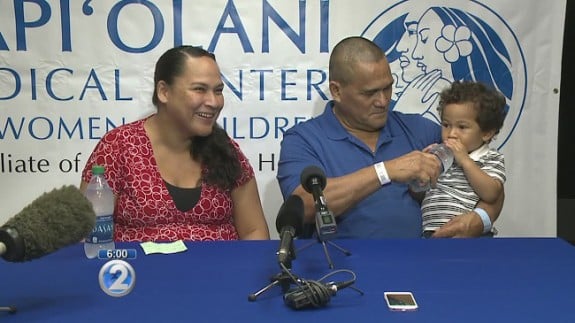 On Saturday, Oahu mom, Marcie Dela Cruz, 37, gave birth to four identical quadruplets and a baby girl at Kapiolani Medical Center. Not only is the birth a first for the Honolulu hospital – it’s also the first for the entire state!

To conceive the babies Marcie turned to In Vitro Fertilization, like she did with her first son Makaio. In order to increase their chances of having one of the embryos implant and develop, doctors transferred two. What happened, however, is a miracle. The second egg split and then each one of those eggs split again creating identical quadruplets. The chances of having identical quads? About one in 11 million to 15 million!

Marcie was 28 weeks and six days pregnant when she gave birth. The babies, who are named are named Kamalii, Kapena, Ka’olu, Keahi, and Kupono, weighed less than three pounds each.

“Seeing them for the first time was whoa! Wow. It’s so surreal, unbelievable they were just all in me. I knew that four of the boys, they were identical, seeing that there was a whole different experience for me. They really do look the same.”

Kapiolani Medical Center started planning for the delivery ten weeks ago. To ensure everything went smoothly there were 30 medical staff on hand to help with the delivery.

“All the babies are stable. They’re all requiring a little bit of respiratory help, which is normal for babies of their age and their size. Other than that, they’re all bundled up and doing well,” said Karen Tao, Mgr., Kapiolani Medical Center NICU.

For now, Marcie and her husband Raymond, 63, aren’t ready to share photos of their new crew. They are waiting until the babies are bigger and stronger before they show them off to the world.

First and foremost is the babies health, and second comes finding a bigger place for the family of 8 to live.