With one trip to the emergency room, the lives of Cynthia and Brandon Ross were turned upside down. Their son, Ryder, who was two months at the time, had multiple fractures. Doctors suspected child abuse, and Brandon was the suspect. He was arrested and indicted on 12 counts, and is awaiting trial. If convicted, he could spend years in prison. 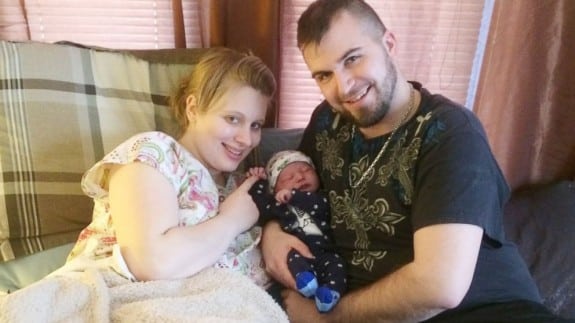 It all started when Cynthia and Brandon were bathing Ryder and his sister, three-year-old Rozalynn.

“I pulled Ryder out of the bath, and I was putting on his lotion, and I noticed there was a difference between his legs,” Cynthia told 20/20. “One of his legs [was] swollen.”

At the hospital, doctors took Ryder in for an X-ray. The results would change their lives.

“The doctor said, ‘I’ve been standing outside the door not wanting to tell you guys this, but there is a fracture in Ryder’s leg. We’re sending you to Maine Medical Center to be evaluated for child abuse,’” Cynthia said.

But that wasn’t all the X-rays revealed.

“I was dumfounded,” Cynthia said. “I mean, we were so delicate with him. We already have a three-year-old, so we know how to handle babies.”

Ryder spent six days in the hospital. During that time, the suspicion against the Ross family grew.

“We were under a microscope, and then we realized they were no longer looking for a medical explanation when the case worker showed up to the hospital and said, ‘We’re seeking custody of your kids,’” Cynthia said.

Doctor reports on Ryder’s injuries state that the fractures were “caused by . . . squeezing or possibly shaking” and that Ryder had been injured by an adult on “more than one occasion while in the care of both parents.”

The children were placed with Cynthia’s father, a registered foster parent. Brandon is only allowed to see his children twice a week under state supervision. And Cynthia, who was not charged, is not allowed to be alone with her children; she visits them with her mother present.

Brandon, who was not told why police had zeroed in on him, was also arrested in connection with Ryder’s injuries. But Cynthia didn’t believe that her husband could have abused their two-month-old son; she’s been fighting to figure out what really happened ever since.

“He couldn’t fight for himself, and I knew I needed to step up and be his voice and figure out what actually happened,” she said. “This is my new job. My new job is to re-unite my family.”

Cynthia’s first break came via her grandmother, who had happened to come across a set of Texas parents that had a story eerily similar to Cynthia and Brandon’s.

Bria and Andrew Huber had been on Katie Couric’s daytime television show, talking about how their infant daughter had suffered multiple unexplained fractures.

Cynthia decided to reach out to them.

For the Hubers, life changed while Bria was away on a business trip back in August of 2012. Andrew had been changing his then three-month-old daughter’s diaper when he lifted her right leg and heard a pop.

“She shrieked and cried, and I immediately pulled back and was shocked and didn’t know what it was,” Andrew told 20/20.

He immediately took his daughter to the emergency room to find out what had happened. His daughter, Kenley, was transferred to Children’s Medical Center of Dallas, where doctors informed him that his daughter had a leg fracture. But, just like with Riley, there was more than just one fracture.

“The mood changed within the medical staff,” Andrew said. “They came back and said they found an additional eight fractures, and possible rib fractures. I was just reeling . . . I knew I hadn’t done anything.”

Bria was told, very early on, that the police believed that Andrew had been systemically abusing their daughter.

“They thought that he was so in love with me that he was jealous of the time that Kenley took from him and so, therefore, he was taking it out on Kenley,” Bria told 20/20. “They are telling me that this life that I’ve had for the past five years has been a complete sham and that, basically, my husband is, you know, a sociopath.”

Andrew was arrested within weeks of taking his daughter to the hospital, and he was charged with second-degree felony injury to a child. His bond had been set at $100,000. The Hubers made the bond, hired attorney Reed Prospere, and Bria started visiting medical experts all over the country to find out what might be wrong with their daughter.

Bria eventually found Dr. Michael Holick, a physician at Boston Medical Center and professor of medicine, physiology, and biophysics at Boston University School of Medicine. He reviewed their records, conducted physical examinations, and then diagnosed both Bria and Kenley with Ehlers-Danlos syndrome (EDS), which can cause extreme elasticity of the skin and flexible joints that are unstable and prone to dislocation. It’s estimated that as many as 1, in 1,000 people may have some variation of the condition, Dr. Holick says.

“I got to see Kenley in my clinic and there was no question, in my opinion, that she has classic EDS,” Holick told 20/20. “It can present with fractured bones—what we call bone fragility—fractures of their long bones, or their rib cage, with minimum handling of the infant.”

And for Bria, the diagnosis made sense—not just for her daughter, but for herself as well.

“It actually kind of pieced together a lot of things I had that were kind of bizarre things that were wrong with me throughout my life,” Bria said. “It all kind of fit into this umbrella of Ehlers-Danlos Syndrome.”

The diagnosis also helped to sway the Denton County district attorney assigned to their case. The charges were dropped, and the case was dismissed. The family was able to be reunited.

“It was very fortunate for Andrew Huber that the assistant district attorney assigned to this case was an intellectually honest, capable individual who ultimately arrived at the proper conclusion and . . . dismissed this case in Andrew’s favor,” attorney Prospere told 20/20.

After hearing their story, Cynthia took Ryder to see Holick. She and Ryder were both diagnosed with EDS. But the authorities are not dropping charges against Brandon, and prosecutors are moving forward with the case.

Dr. Robert Sege, a member of the American Academy of Pediatrics Committee on Abuse and Neglect shed some light on why that may be.

“They taught me in medical school to never say never, but what I can tell you is that there’s no published literature about EDS causing fractures in infants,’ Sege told 20/20. “There’s no objective evidence for it, and I’m not aware of any other doctors who’ve found it with the same frequency that he has. So those are all reasons that cause one to be skeptical.”

But Bria says that EDS is real, and that it can’t be used to excuse child abuse.

“This is not a scapegoat for abusers. This is a medical condition,” she said. “You can’t fake a myriad of the other symptoms that go along with Ehlers-Danlos syndrome.”

And Cynthia, who has gone on campaign to clear her husband’s name—speaking to the media, writing the governor of Main, talking to Bria, and speaking with other families in the same situation—isn’t giving up just yet.

“I know that child abuse is a large problem, but I also believe that, if you investigate a family that has no risk factors, follow them around for ten months, and nothing jumps out as ‘this is the reason that the child had injuries,’ then I feel like the authorities should be more accepting of a medical diagnosis,” she said. “I know, just with every fiber of my being, that God is going to prevail for our family.”