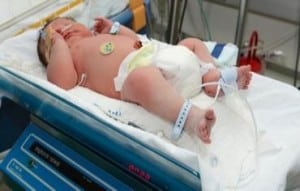 This has been the Summer of the big baby!  In August a Mexican mom welcomed a bouncing 14 pound, 8 ounce baby boy.  Just a few weeks earlier  a German baby girl and a Spanish baby were both born weighing 13 and a half pounds making them the biggest babies born in their countries.

On Wednesday, the Jerusalem Post reported that 31-year-old Sivan Dabush from Haifa gave birth via cesarean section to a 14lb baby boy.

A shock to everyone, the baby was so huge that the hospital’s neonatal unit didn’t have a sleeper big enough for him and had to buy new clothes to accommodate his large size.

The new mom revealed that while her two other boys were big she also developed gestational diabetes during her pregnancy.

“I suffer from infantile diabetes, so the medications I take (insulin) cause the babies to be big. This was my biggest — and for sure the last,” she said.

Doctors at the Rambam Medical Center knew the baby would be big, but even they were surprised by the infant’s size.

“This is the second-largest baby I have encountered at Rambam, said Prof. Shraga Blazar, head of neonatal and pediatric intensive care. Twenty years ago I delivered a 6.3-kilo baby, but even when I worked in the US, I never saw such a big newborn.”

“For the sake of the mother’s and baby’s health, we prefer not to have such situations,” said Prof. Ido Sholet, head of the high-risk pregnancy unit, “but despite the unusual weight, the delivery went well.”