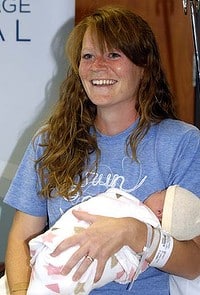 Amber Miller, an Illinois stay-at-home mom, ran in the Bank of America Chicago Marathon, finishing in six hours and twenty five minutes. While that’s pretty amazing, it’s even more amazing that her due date was only eight days after the marathon. No, you didn’t read that wrong! Amber Miller was pregnant! I say “was” because she also delivered just seven hours after completing the marathon.

Miller told reporters that, even at the last minute, she wasn’t sure if she was going to run. Originally, she had thought that she would no longer be pregnant by the time the marathon rolled around. But, as it turns out, she was still awaiting on the birth of her daughter.

“I was real determined to run and I kind of thought I would have already had the baby [but] it comes to the night before [and] I’m still pregnant. [I figured] I paid for it, so I’m going to run it,” Miller said in a news interview. And run she did.

Originally, Miller had planned to only do half of the marathon and then skip out to the finish line. She also planned to listen to her doctor’s advice – she would listen to her body and conserve her energy, alternating between walking and running.

“I thought it’s likely that the last few miles, I’m going to get really, really tired,” she said. But instead, as she neared the halfway point, she said she still felt great so, she kept going. She completed the entire race. “Pregnancy-wise, I felt fine. The baby was still moving, I was drinking a lot, eating a lot,” Miller stated.

During the race, she started to experience what she assumed were Braxton Hicks contractions, which were pretty normal for her while running. Even as she crossed the finish line, she wasn’t sure. She decided to lie down in the grass and wait to see if the contractions went away. They didn’t.

She and her husband, Joe, then decided to drive and grab a bite to eat. When the contractions still continued, Miller finally thought she might really be in labor and, as it turns out, she was. Little June was delivered just hours later.

Her doctor stated that, while marathon running isn’t usually recommended during pregnancy, Miller was in good health and a very active runner before, during and after both of her pregnancies.