A child is being hailed as a “miracle baby,” after the infant survived a deadly car crash in the early hours of Wednesday morning. Only 12 days old, the child’s mother, Ana Perez, had been breastfeeding her newborn at the time that the crash occurred, and had been able to shield the child from any harm using her arms. 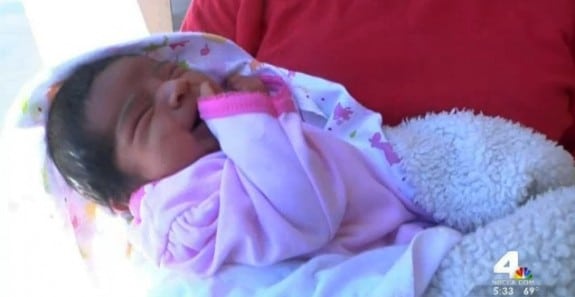 Perez says, “(The driver) was trying to avoid it, but it was too late.” The bus that she and her newborn were traveling in was headed to Los Angeles, from El Paso, Texas, which is an roughly 800 mile trip. At approximately 2:15 a.m., the bus struck metal pipes that were scattered across the dark road. Moments before the deadly accident, the pipes had fallen out of a flatbed truck that had jackknifed after hitting the dirt median on Highway Interstate 10, which is the main road that links Southern California and Arizona. 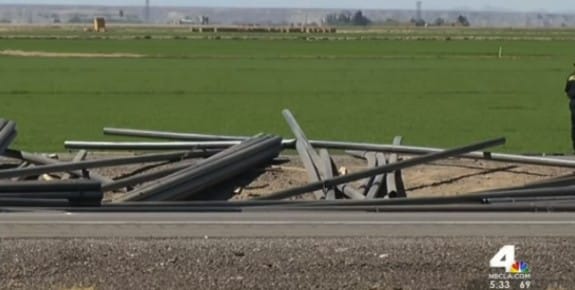 According to California Highway Patrol spokesperson Jason Girard, after the bus hit the pipes on the lonely stretch of desert highway, it “veered to the right,” rolling down an embankment and eventually overturning. 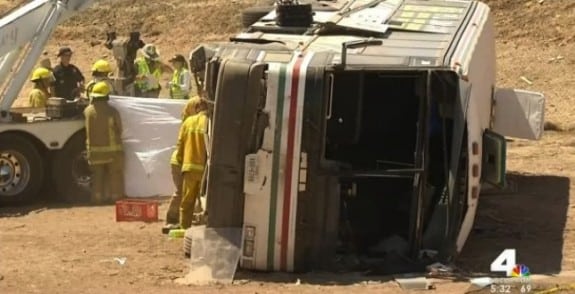 Four passengers were killed and another seven needed to be airlifted to local hospitals with serious injuries.

‘It was really, really bad,’ Anna told news reporters ‘It was horrible. I didn’t let her go.’

‘The driver was trying to avoid it, but it was too late,’ she revealed ‘When I got up, I was in between two dead bodies. It was horrible’

Baby Daniela was not injured, and Anna only suffered a couple of bruises on her leg and back from hitting the side of the bus window.

Authorities believe that there were about 33 passengers aboard the bus, which was approximately three quarters through it’s trip. The National Transportation Safety Board is currently investigating the crash.

The bus, was being operated by El Paso-Los Angeles Limousine Express Inc. The driver sustained minor injuries in the crash.