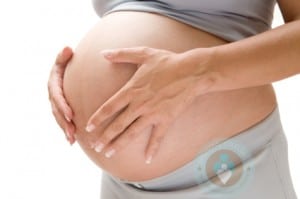 Life can be full of joy, happiness and wonder. It can also be full of heartache, worry and fear. Often, we dread those scary moments. We shake our heads in sadness and our hearts bleed when we hear of others that have to be strong in the face of adversity. We wonder how the strong ever get through those hard times and we secretly fear ever having to face the same. Yet, deep inside of each and every one of us is a strong person, a person that is able to endure more than we ever thought possible. Lisa Copley found her strength while carrying her children. The following quote accurately describes her situation.

“You don’t know how strong you are until strong is the only choice you have.”  — Author Unknown

For Lisa, the test of strength started when she and her partner, financial planner James Richardson, were unable to conceive a child naturally. To find out what might be wrong, Lisa’s GP referred her to a specialist. It was then that Lisa was diagnosed with polycystic ovaries. It was also determined that Lisa’s cervix had fused shut, possibly after a laser treatment to remove abnormal cells when in her 20’s.

Shortly after learning that IVF might be her only chance at getting pregnant, she and her partner started fertility treatments. Their first two attempts were unsuccessful. Lisa admits to feeling crushed after the first two cycles.

“You’re told not to get your hopes up, but it’s impossible,” Lisa said. “IVF is such an emotional roller coaster.”

During their next attempt, in April of 2011, doctors transferred two embryos into Lisa’s uterus. Just days later, she discovered that the most recent treatment had been successful. The line on her home pregnancy test, a dark blue, led her to believe that she might even be carrying twins. Shortly after, a scan confirmed that her inclination had been correct.

Unfortunately, Lisa’s cervix presented a potential problem; doctors monitored her pregnancy closely because of it. And just as the doctors feared, it only took a few weeks after the excitement of finding out they were pregnant before doctors had to deliver the disturbing news.

“A scan showed my cervix had thinned out to 20mm, which was half what it was actually supposed to be,” Lisa said. “The doctors didn’t think it was strong enough to be able to support my babies’ weight and I was told I was at a high risk of miscarriage.”

At her 15 week visit, doctors found that her cervix had thinned even more and they signed her onto work release. Three weeks after that, Lisa and her mother went to a 3D scan of the babies. The experience would be one that changed everything.

“It was incredible,” said Lisa. “But then they dropped the bombshell that, despite me resting, my cervix was even thinner. Basically, I was told that if things progressed in the same way, then I would probably lose my babies.”

A consultant at the Royal Surrey County hospital told Lisa that surgery and medicine couldn’t help save the twins. She had only one option – to go on full bed rest.

“I was shocked, especially when they said they were admitting me immediately,” Lisa stated.

Whisked off to a bed in the corner of the maternity ward, Lisa would soon learn just how strong she could be. That bed would be her home all fall and most of the winter. Leaving the bed wasn’t allowed, except for trips to the bathroom, and only because the restroom was just two steps from where she lay.

“It was too overwhelming,” she said. “At first, I set short goals, like making it through the first week.”

But she would need to make it much longer. She needed to make it at least to 23 weeks if she hoped to receive any kind of medical care for the twins. Delivering even one day before that would mean no care, no treatment and no life for her infants. (NHS does not provide medical care for infants born prematurely before 23 weeks gestation.)

“I knew my babies were in grave danger,” she said. “The expected me to go into premature labor and I knew that if I did before 23 weeks, they wouldn’t have a chance.”

Strength didn’t happen immediately. The first several weeks were torturous, especially since Lisa had no way of knowing whether or not staying in bed could save her babies.

“Other women were happily preparing for Caesareans or in labor, knowing they would be taking their babies home, whereas I could lose mine any minute,” she said. But even through the worry and uncertainty, she was stronger than she could have imagined. Her partner and father of the children, James, would help her see her efforts for what they really were – selfless and amazing.

“I cried only twice. I had a really bad day when I was sobbing down the phone to James. When we came off the line, he sent me a text, telling me that whatever happened, I was already a brilliant mummy as I was doing everything I could for my babies. That was the turning point and I pulled myself together again.”

Honestly, to say that she pulled herself together is quite the understatement. The days turned to weeks, and the weeks to months. While the time still wore on relentlessly, she found a way to make it through. James was part of it – visiting her every day, bringing her tasty meals from home. The staff at the hospital helped as well. Before long, she knew all of their names.

Finally, Lisa had made it to 20 weeks. She only had four more to go. But a scan would show that her cervix was now only 8mm thick. Knowing that, Lisa became even more nervous that the babies wouldn’t make it.

“I was too scared to cough or sneeze, let alone stand up,” she said. “I just prayed we would get to 24 weeks.”

And despite the fear and worry, 24 weeks came and went, and there still weren’t any signs of labor. At 28 weeks, doctors decide that Lisa could take a short trip to the special baby care unit, where her babies would most likely be cared for, shortly after their birth. This trip would indicate just how much Lisa had sacrificed to save her babies.

“Doctors felt sure they would arrive any day, so they wanted me to be familiar with the unit,” Lisa said. “But I’d been in bed so long that I could hardly stand because the muscles on my legs had wasted away. When I tried to walk, I fainted. So James took me in a wheelchair, but even that was exhausting for me. Then I began bleeding and having contractions, so I was advised not to try walking again.”

Eventually, Lisa reached 32 weeks, and the orders finally changed. She and the babies were finally in the home stretch, so doctors wanted her to start working on standing and taking steps again so that she could prepare for the birth or to return home and wait for labor to happen. After two painstaking weeks of working at it, doctors decided that Lisa could wait out the duration of her pregnancy at home.

“I compared it to how it must feel to be released from prison,” Lisa said. “Our house isn’t huge, but it felt like a palace.”

Unfortunately, her stay at home would be short-lived. Just one week after leaving, Lisa returned to the hospital with pre-eclampsia.  The twins needed to be delivered. Little Lola would be placed into her mother’s arms immediately, but Lucas needed to spend some time in special care due to some delivery complications. His time there, however, would be short – just three days. And soon after, the entire happy family would be released home.

Now, four-months-old, the entire family is doing well. Lola and Lucas are growing and thriving. Other than needing physiotherapy for back pain, a side-effect of the months spent in bed, Lisa is pretty much back to her old self – only now a very happy mom who says that every minute in that hospital bed was worth it.

“When you know your babies’ lives are on the line, being in hospital for that long is easier than you think,” she said. “At times, I feared I wouldn’t be a mum. Now I have the perfect family.”