Police said an Iowa woman wanted a wedding gown so badly that she would have traded her child for it. 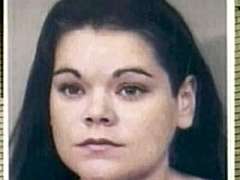 Davenport, Iowa, police charged 31-year-old Marcy Gant with one felony count of sale of an individual. She is accused of trying to sell her 4-year-old son.

They said Gant bought a wedding dress from a local street vendor, paid part of the tab, and offered her son to make up the rest of the balance.During negotiations for the payment of this wedding dress, on at least two occasions, Ms. Gant offered her 4-year-old son as collateral,” Capt. Dave Struckman of the Davenport Police Department.

Neighbors said they were shocked.”

(There is) something very mentally wrong with her to think that that is OK,” said Angie Bruce, Gant’s neighbor.

“(If) those children go back to her they’re in danger. That’s just not acceptable if the state lets her have those children back.”If convicted, Gant could face 10 years in prison.

Jail is the perfect place for her!! It will give her time to think about how much of a horrible person she is… and she is still not getting the dress!!!