Everyone wanted to see baby Colten when he was born last Sunday at the Boone Hospital Center in Columbia, Missouri and for good reason.  Looking like a four month old, the baby boy arrived weighing a whopping 14 pounds and 6.4 ounces! 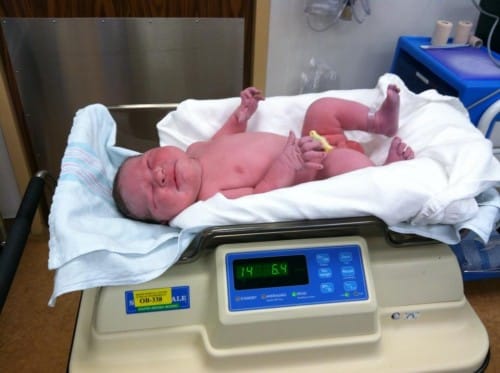 Doctors had already warned parents Donny Swanigan and Roxanne Giordano that they might have a big baby. But though the couple expected their third child to be above 10 pounds like their other children, they had not expected him to be this big.

“I was in shock,” mother Roxanne said yesterday to reporters from Ozark’s First.

“I am still in shock,” Donny said.

“It is more weight than I am supposed to lift right now,” Roxanne added.

Colten’s elder siblings Treyton 11, and Jayden, 8, had both weighed more than 10 pounds when they were born.

“All through my pregnancy, I was way bigger than I should have been,” Roxanne said.

According to the state Department of Health and Senior Services records only 1.5 percent of babies born in Missouri way more than 9 pounds. It is still not confirmed if Baby Colten is the biggest baby born in the state.

“While we don’t have records available that would show this is the largest baby ever born at Boone Hospital Center, our caregivers in the Boone Family Birthplace could not remember any babies that weighed more so, anecdotally, this child is our largest in recent memory.”

According to the Guinness world records, the biggest baby ever born was 23 pounds and 12 ounces, but the baby died in 11 hours. The heaviest baby to survive was reportedly 22 pounds, 8 ounces and was born in 1955 in Italy.

Baby Colten also measured 23 inches which is the average height of a three month old.

Donny is originally from Nixa and works for Roberts Construction. Roxanne works at Tiger Tots Child Development Center and is studying education at Columbia College. The couple have been together for 13 years.

Roxanne says that though her pregnancy was without trouble, due to the size of the baby boy’s neck, doctors thought that there might be some birth defect. None were found during the scans. With her big womb, she says the normal movement of the baby and his kicking reminded her of the movie ‘Alien’.

“It would gross my daughter out because it was like a wave across my stomach,” she said.

The baby’s weight was much the talk of the hospital too.

“He was the talk of the hospital,” Roxanne said. “And they said he must have had a twin in there with him and he ate it.”

The baby and mother are at home enjoying the added attention showered by neighbors and friends.