When Karyn Faster’s Dec. 20 due date passed, the mom-to-be and her husband Victor suspected the baby had a grander date in mind.

Not knowing when their baby would arrive the family went about their traditional Christmas routine, attending mass, and then joining their family at a dinner party. 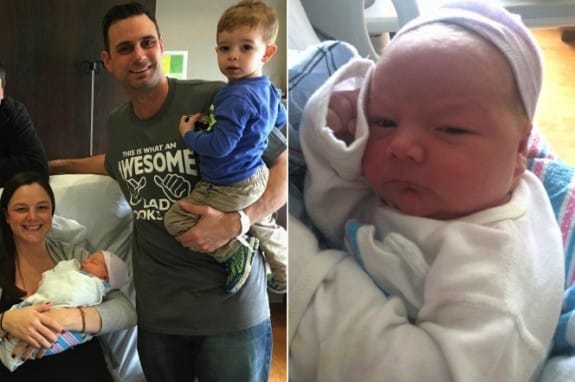 What makes the date even more exciting is that the couple welcomed their first son on Christmas Day two years ago. But the similarities didn’t end there.

“And as it turned out, It was the same hospital, the same medical team, the same delivery room,” Karyn told the New York Post. “Everyone on the staff was astounded.”

“It was literally a reenactment of 2013,” Victor said.

“Except that we had to miss the dinner for Anthony,” said Karyn. “I said, let’s enjoy ourselves and get a good meal in this time.”

One big difference, however, is that Nicholas arrived weighing is a pound and a half larger than his brother at 10 pounds 3 ounces,

“They say the second baby is easier. Not this time. The nurses called him a linebacker,” Karyn said.

“My mother was in the delivery room,” She added. “She said I deserved a medal.”

This time around the baby’s name was inspired by his birth date and one of its most famous character.

“His name is a tribute to jolly old St. Nick,absolutely, absolutely” said Victor. “It was just too ironic.”