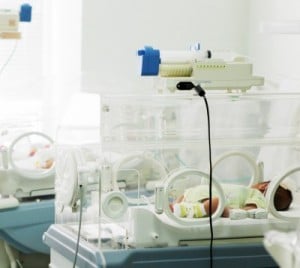 Three weeks ago, Radesham Neeranjan and his wife did not even suspect that they were having a baby. But when severe abdominal pain brought the couple to the hospital, they were stunned to learn that not only was Surujdaye 30 weeks pregnant, but she also would need a surgery to deliver the baby who was growing outside the womb!

39 year old Surujdaye Ramlakhan from Rock Road, Penal in Trininad was admitted on Monday to the San Fernando General Hospital. She was scheduled to have surgery to deliver a baby girl she did not even know about till three weeks ago.

The procedure was high risk because the baby had developed not inside the womb, but outside it, in what is termed as abdominal pregnancy. Now Surujdaye risked bleeding to death while doctors performed the risky operation.

He said his wife went to the hospital after experiencing severe pains.

“She was normal. She was doing everything like normal. We would not have suspected that she was pregnant. Then she started to get some pains and we carried her by a private doctor who advised us to visit the hospital. We went to Princes Town Hospital and they did a pregnancy test and that was how we found out she was pregnant. From there we came to the hospital here.”

Dr Krishna Rampersadsingh, head of the Obstetrics and Gynaecology Unit at the hospital performed a laparotomy to deliver the baby girl. It is an incision through any part of the abdominal wall to bring the baby out.

The new mom was monitored for one day in the Intensive Care Unit (ICU) for precautionary measures and was yesterday transferred to the hospital’s post natal ward.

A tired but smiling Surujdaye says,

“I had full faith in the doctors and my husband gave me courage and everyone around me gave me courage. I had a little bit of fear though but I still made up my mind to have the baby.”

The baby is yet to be named, but the couple are considering naming her Anuradha after the Hindu deity Radha, Lord Krishna’s wife.

Neeranjan said, “I am still in shock. I can’t believe I am a father. It does not have enough words to express how I am feeling right now.”

The new parents are very lucky they’re baby girl is healthy and doing well.  With abdominal pregnancies, it is reported that fetal malformations can be as high as 40% and only 50% of these babies survive up to one week post delivery.

The newborn is their third child and the mother’s sixth pregnancy.