A routine traffic stop for a broken headlight revealed much more than a Florida police officer could imagine.

A Miami mom is in jail, and a baby is in the custody of the Florida Department of Children and Families after the 5-month-old was found crying in the trunk of the family’s car. 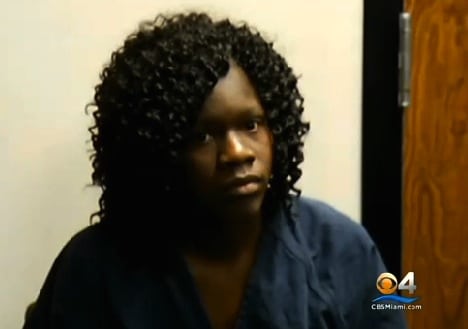 On Wednesday night a Broward County Sheriff’s (BSO) Deputy pulled a car over after he spotted a broken headlight.  Sergeant Thomas Hinton told CBS News had been talking with driver Breona Watkins, 19, and a 14-year old passenger for 15 or 20 minutes when another officer, who arrived for backup heard crying coming from the trunk of the car.

“I got closer to the trunk and then I heard it,” Juan Canino told CBS4’s Carey Codd.

“Grabbed the keys, popped it open and geez, I couldn’t believe it. There was a tiny, little kid. I was shocked. I was kinda angry, too,” said Canino.

“He was crying, with tears on his face, coming down the side,” Canino said. “Seemed like, one he was hungry and two he was scared.”

Breona was reportedly concerned she would get a ticket because the baby wasn’t in a car seat and asked the passenger to put him in the trunk hoping he wouldn’t be discovered.  What was disturbing, however, was that the baby was lying on top of a large pair of bush cutting shears, a rusty metal hanger, a plastic CD case and a large rusted tire iron.  He was also surrounded by a used gas can, a used fuel pump, plastic bags and many other hazardous materials which could have easily injured or killed the infant. 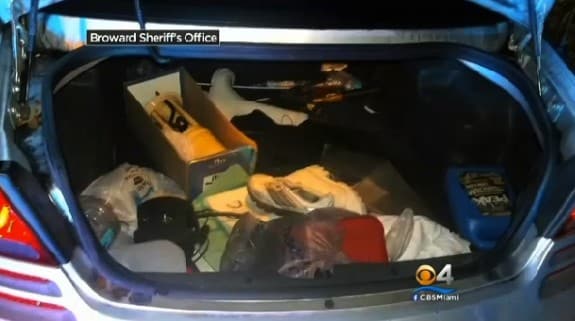 Breona faces a pile of charges including child abuse without great bodily harm, resisting an officer without violence, operating without a valid driver’s license and no safety belt for a passenger under 18.  She is currently being held on $7,000 bond and officials are evaluating her grandmother to determine if she is fit to take custody of the baby.