Heather Bays was perusing Instagram over the weekend when she received a comment on a photo of her holding her daughter and nursing her saying “Not cool.” However, this isn’t the first anti-public-breastfeeding comment that Heather has received on the popular photo sharing website before. But she made the conscious decision to be the bigger person and respond with a witty “You mean so cool.” 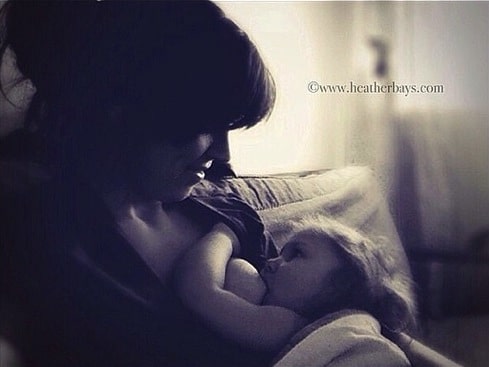 Heather says that “Within a minute I had like ten emails from Instagram saying ‘Your photo was removed because of sexually explicit content,’ and of course when someone does that to your account a certain number of times, it’s automatically disabled.” Heather is a photographer by profession, specializing in maternity and childbirth photography.  She says she felt devastated when she first realized that her account had been suspended.

Instagram’s Terms of Use “You may not post violent, nude, partially nude, discriminatory, unlawful, infringing, hateful, pornographic or sexually suggestive photos or other content via the Service.” The image in question does not depict Heather’s entire breast, but is a tasteful photograph of a mother nursing her child.

According to a company representative, Instagram and it’s parent company Facebook say that they do allow their users to post photographs of mother’s breastfeeding their children, saying,

“We agree that breastfeeding is natural and beautiful and we’re glad to know that it’s important for mothers to share their experiences with others on Instagram. The vast majority of these photos are compliant with our policies. Photos that show a fully exposed breast where the child isn’t actively engaged in nursing aren’t following our Community Guidelines. These policies are based on the same standards which apply to television and print media.”

Heather says that she has been very careful, making certain that when she posts photos of breastfeeding that there is no full frontal nudity visible. But she does believe that it is not fair that breastfeeding moms are being targeted when there are many Instagram accounts with women showing just as much, if not more skin. She adds “I’ve had lots of people comment on my pictures saying that I shouldn’t publicize [breastfeeding], that it’s something that should be kept in private, but I don’t believe that.” Heather says that the warning e-mail she received from Instagram isn’t clear on whether her account is disabled temporarily or indefinitely.

Heather isn’t the first mom to be targeted on Instagram for sharing breastfeeding photographs. In August 2013, a user had her account removed after she had posted a photo of her performing a nude handstand while her daughter was nursing go viral. Many supporters came to the aid of Amy Woodruff, even using the hashtag #SaveDaughterOfTheSon, which was Woodruff’s username on Instagram. However, her account was never restored. Taking a cue from Woodruff’s case, Heather began using a hashtag as well, #SaveHeatherBays, in order to bring about more awareness to her case. She also says that friends of hers have been sharing screenshots of the image, which have since been deleted on Facebook and Instagram.

Heather is distraught over the loss of her account, but not because of the breastfeeding debate, but because her gallery captured the memories of her life as a mother, saying,

“I started using Instagram just after having my first child, so it was like my entire motherhood documented – every milestone […] it’s just heartbreaking. And lots of people keep telling me to start a new one, but it’s not that easy.”

UPDATE: Earlier today Heather updated her Facebook page noting that Instagram had called her to discuss her account. They told her the issue wasn’t with the breastfeeding photo, but with  ‘a picture of a child of walking age that has it’s torso showing’.  This, they say, is classified as child pornography.  Heather wrote,

“I was SO SO MAD! So, let me get this straight, all those disposable diaper companies are child pornographers? All those cloth diaper ads!! Heck, so many commercials of naked baby bottoms!! So they are accusing A LOT of people of being child pornographers! Anyway, she promised to have my account up within 2 hours and it’just got reactivated 17 hours later!! And she told me that they are removing all the pictures of my children with their torso showing. RIDICULOUS!!”

As promised, the account was re-instated tonight.  Congratulations to the mom for her persistence, and ability to get the story into the media.