Baby talk—responding to and speaking to babies during the first year of life—is crucial for language development. In fact, a study published in the journal Pediatrics found that premature babies, who often experience language delays, benefit greatly from being talked to as early as possible. Now a new study, has found some interesting statistics when it comes to the amount of language infants are exposed to. 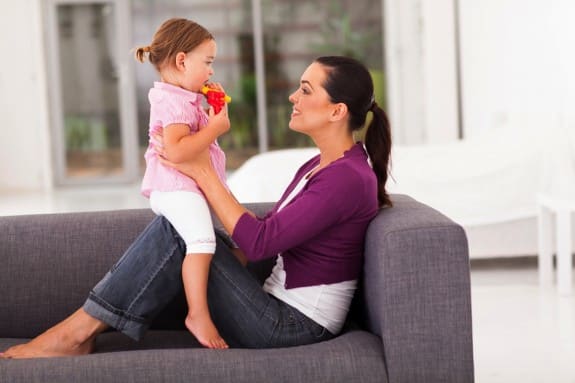 “We wanted to look more at gender and factors that affect these essentially mini-conversations that parents have with infants,” lead author and neonatologist Dr. Betty Vohr, director of the Neonatal Follow-Up Program at Women & Infants Hospital of Rhode Island, told Today. “Infants are primed to vocalize and have reciprocal interactions.”

Not overly surprising, researchers found that moms vocally interacted with their children more frequently than dads, and moms were more likely to respond immediately to their baby’s noises—mothers responding about 88 to 94 percent of the time and dads 27 to 30 percent.

Researchers did say that a signification gap in language input from fathers could have long-term implications as children get older. In fact, previous studies have found that it is dad’s language input that seems to be a predictor in the language skills as children mature.

One such study, conducted by Dr. Lynne Vernon-Feagans, the William C. Friday Distinguished Professor of Early Childhood, Intervention, and Literacy and professor of psychology at the University of North Carolina and colleague Nadya Pancsofar at the College of New Jersey found that dad’s education and vocabulary usage when reading to kids at 6 months of age was directly related to how expressive a child was t 15 months, and dads influenced language development at the age of 3.

However, children are receiving that language stimulation from moms—researchers suppose this is most likely because mothers tend to spend more time at home with their children. But, surprisingly, this engagement is happening more with infant girls than it is with boys, and it’s exactly the opposite for fathers—but since father engage less, boys may be getting the “shorter end of the stick” when it comes to language stimulation; though not statistically significant, the researchers said it was a factor that didn’t go unnoticed.

“This is an interesting study in terms of gender and differences, but we do know that moms talk more to their kids than dads because moms spend more time with infants and children,” Dr. Vernon-Feagans told Today. “But what I think is a real message here is that both parents play a role in language development.”

Of course, the most important question is whether or not we should be worried about the language development of boys because of the slight difference in engagement.

“My take is ‘no,’ there’s no reason to worry since it seems to even out as a child gets older,” childhood development expert Dr. Julie Braungart-Rieker, University of Notre Dame professor of psychology and director of the William J. Shaw Center for Children & Families, told Today. “If a child seems understimulated, engage with them more, and if a child is overstimulated, back off a little bit.”

Braungart-Rieker also gave kudos to the research group for including fathers in this particular study since “too often fathers are forgotten.”

“I would like to give these researchers credit for including dads in the research,” she said. “Dads often feel left out of the loop, and we need to bring dads into the circle of care.”