When it comes to vaccinating our children there are many opinions on both side of the argument.  At the end of the day immunizations save lives, there is no doubt about it. Often, the risks of any adverse affects from vaccinating are minimal, and the benefits far outweigh the minute risks involved. One Canadian mother can attest to that. 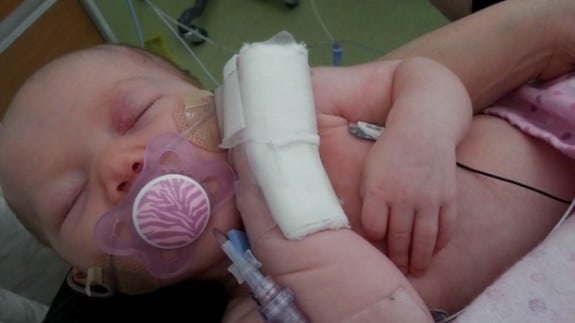 It is an extremely contagious bacterial infection that affects the airways and lungs. Today marks the 11th day in the hospital for the five week-old. Pertussis can be especially dangerous in infants, with some serious cases causing vomiting, convulsions, weight loss, brain damage, and even death. In a 2010 California outbreak of the disease, ten infants died and over 9,000 people had fell ill. The symptoms of pertussis can include red watery eyes, severe cough, runny nose, and fever. In young infants symptoms can also include difficulty breathing, poor feeding and a severe cough that can cause choking.

The best way to protect children from contracting pertussis is getting them vaccinated against the infection. Infants do not receive the pertussis vaccination until they are two months old, so Brielle had not yet received hers. In an attempt to save other infant’s lives, McNutt-Anderson had turned to social media to remind parents of the risks that are involved when they decide against vaccinating their children. Not only do they run the risk of their children contracting an illness that is preventable, but their un-vaccinated children also pose a risk to other children, with the possibility of making other younger children who have not yet reached vaccination age, sick as well.

On April 1st, Brielle’s mother posted a photo of the little girl in the hospital on Facebook, as well as a short description of Brielle’s situation. In the post she wrote,

“This is why you immunize your children! We have spent the last three days in the hospital at her bedside holding her up and patting her back as she coughs. You see, every time she coughs, she stops breathing, turns blue and goes limp. She has too much mucous and her airways are too small to cough it up and they become blocked and we have to manually help her pass it. We will likely be doing this to Brielle for the next 2 weeks at least. Brielle is too young to be immunized yet and children whose parents chose not to immunize them, put small babies like Brielle, as well as others with compromised immune systems, at risk.”

She also adds that had they not made the decision to take Brielle to the hospital for treatment, she very well could have died from a coughing fit.

Her Facebook post quickly garnered over 37,000 shares and went viral in less than a week, with many parents sharing their support, thoughts and prayers for Brielle with McNutt-Anderson. She shares her feelings “Wow! When I wrote this I had no idea how far it would be shared. I would like to give a heartfelt thank you for the hundreds of private messages I’ve received of well wishes from across the globe.” However, not everyone agrees with her stance on vaccinations. She elaborates,

“My intention here was never to start a public debate, but rather to share our story with friends and family. We need all the positivity we can get right now, so I will not be opening up commenting to the public.”

The Facebook post came on the heels of several other outbreaks of measles were popping up in various Canadian provinces. Measles is another diseases that can be prevented with a vaccination. An outbreak of the disease in British Columbia’s Fraser Valley has seen over 300 cases thus far, and is believed to have started in an elementary school before gaining traction in the broader community, where officials say is a region with low vaccination rates.

Public health officials stand firm that the best way to prevent such diseases is “herd immunizations,” when a large part of a community is immunized against an infectious disease, thus protecting the individuals who cannot receive a vaccination, such as pregnant women, infants, or those with compromised immune systems.  During 2013, nearly two thirds of the measles cases reported in the United States came from three outbreaks.